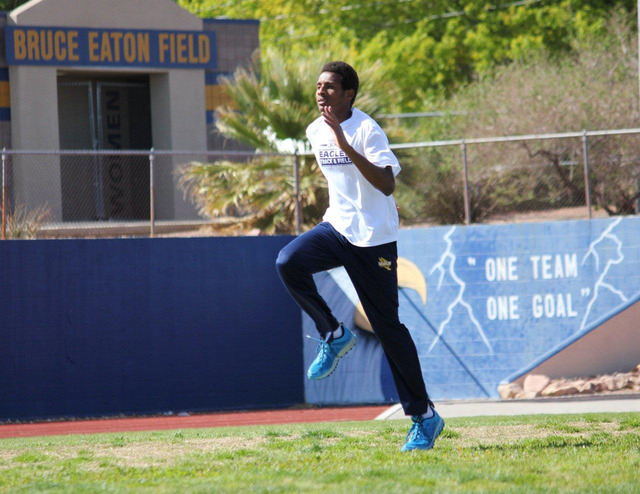 Jacorey Dixon won the 300 hurdles in 40.8 seconds and ran on the winning 800 and 1,600 relays to lead Boulder City to the team victory with 182½ points Friday in the Grant Bushman Invitational at Overton.

Virgin Valley, with 133 points, came in second in the meet, while Moapa Valley placed third with 98 points.

“We are looking strong considering we have only 24 boys on the team,” coach Josh Fisher said. “We have strong distance runners, as well as hurdlers and sprinters. Our throwers are looking good and we are hoping to advance four into the post season.”

“If we can pull it all together during the season and gain momentum, we can have a very special year through the region and state,” said Yann Moncayo, a sprinter and long jumper who is one of three team captains, along with Maxwell Dodd and Dixon. “We have a lot of talent for being a small squad.

“The team is constantly improving even from the start of the season until now, but we all have to want it and want to make the sacrifices to work hard and get better day by day. They boys and the girls are working together in certain events and it will benefit us all,” Moncayo said.

In the girls’ meet in Overton, Virgin Valley finished with 154 points, 26 ahead of second-place Boulder City’s 128 points.

But the Lady Eagles managed some excellent performances.