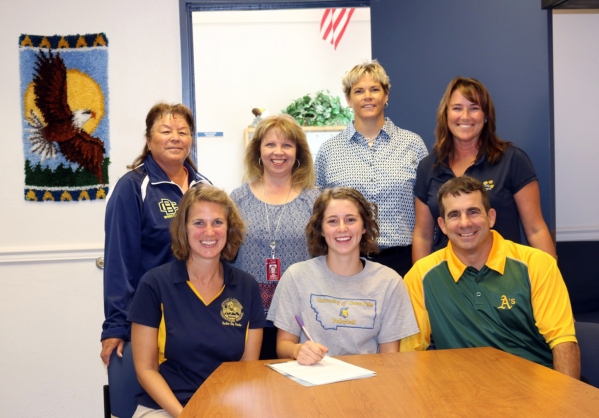 School has been in session for less than a week, but senior Tarah Cox already knows where she’ll be going to college next year.

Surrounded by friends, family and administrators inside the principal’s conference room at Boulder City High School, Cox signed her letter of intent to attend the University of Great Falls, where she’ll play volleyball next fall.

Located in Northwestern Montana, the University of Great Falls has a student population of about 1,000, an attribute that catered to Cox, despite receiving other offers from schools along the East Coast.

“I had never really considered it because it’s like 1,000 miles away from home,” she said. “But I figured I’d go up and try it.”

Cox was at a volleyball camp in Los Angeles when the University of Great Falls’ head volleyball coach reached out to express his interest in her joining the team.

She and her family went to Montana to tour the campus, take in the culture and meet the team.

“When I called the head coach and told him I was going to play for his team, his response was, ‘Oh sweet. I’m happy for you,’ ” she said with a laugh.

Cox is no stranger to success on the volleyball court. As a member of the the Lady Eagles’ freshman volleyball team in 2012, she won the Clark County District Championship.

But improving her game up and playing with more experienced girls on the varsity level wasn’t an easy adjustment for her, even after having a district title to her name.

“You’re kind of nervous because there are all these junior and senior girls who are really good, and they’re intimidating, but they’re inviting,” she said.

Rachelle Huxford, who serves as the assistant coach for the Lady Eagles’ varsity volleyball team, has seen Cox blossom throughout the years. She said Cox’s mental toughness and receptiveness to criticism have been assets to the team since she first came on in 2012.

“She’s a quiet leader. She leads by example and every girl on that court respects her for that, because she is a great person on and off the court,” Huxford said. “She wants to get better, and that’s all a coach can ask for in an athlete.”

Cox’s parents, Kim and Jim Cox, described her as a kid who has always done whatever it took to get the job done. Kim Cox said her daughter can be found bouncing a ball against the wall in her bedroom at night in order to keep her mind sharp and her skills intact.

“She has little positive notes written all over her room about her goals to keep her mind focused,” Kim said. “It’s really exciting to see her achieve something she’s dreamed of for so many years.”

Cox still has her senior year to look forward to, as well as one last volleyball season before she trades in the Boulder City summers for the harsh Montana winters.

“I’m really looking forward to just being on my own and trying things by myself. I won’t have any close connections with home, so it’ll just be me,” she said. “Right now, I’m just excited.”