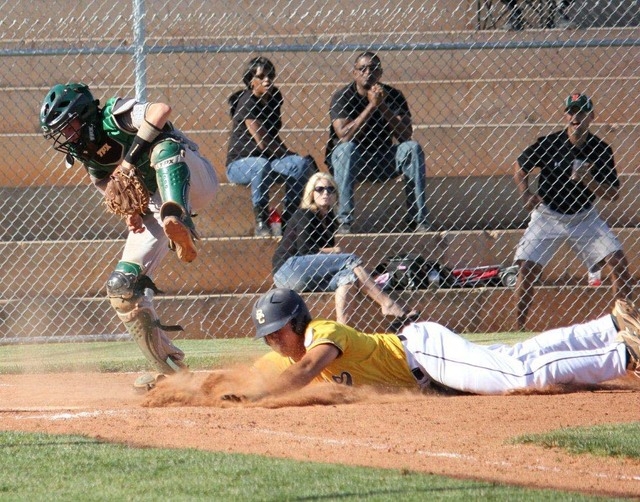 Having three schools move down into Division I-A, including Del Sol, into Boulder City’s league is not a big deal, according to the majority of the school’s coaches.

The Nevada Interscholastic Activities Association, which governs high school sports and activities, last week released the final Nevada rubric scores to determine alignment for Division I and Division I-A schools in Southern Nevada for the 2014-15 and 2015-16 school years.

“When the NIAA first started the new alignment two years ago a few of the larger schools were grouped with the smaller schools, but it hasn’t really affected us on a competitive level,” said Boulder City Athletic Director Regina Quintero, who also coaches the boys and girls golf teams. “We have done pretty well overall in the new alignment since 2012. It becomes harder for us to compete as more and more larger schools drop down to our division, once for the middle-size schools in the state, and it becomes tougher on our kids. But we will still be successful.”

Although no schools that have competed in the lower Division I-A for the past two seasons will be moving up to Division I, three teams will be dropping down. Del Sol will be competing with Boulder City in the Sunrise League, while Sierra Vista and Spring Valley go to the Sunset League and could be the Eagles’ opponents in the Southern Region or I-A state playoffs.

“In volleyball, the new alignment two years ago only meant different teams on the schedule,” head coach Cherise Hinman said. “We have been very competitive and successful in our league and region. I think it will be much of the same in the new alignment this fall and for the next two years.

“Even before the change two years ago, we scheduled larger schools to push ourselves and to test our athletes. We will be fine.”

Boulder City will compete in the now eight-team Sunrise League along with longtime rivals Virgin Valley and Moapa Valley, and newcomer Del Sol. Tech, Desert Pines, Sunrise Mountain and Chaparral remain from the past two seasons.

The Boulder City football team has made the playoffs in both seasons and the girls’ flag-football team this season reached the Southern Region title game, one win short of the county championship in a league of 34 teams regardless of school enrollment.

“We competed against all schools in the county in flag-football and almost won it all. Our athletes are not intimidated by the larger schools, and they went out and proved it all season,” head coach Chris Morelli said.

Success was everywhere for Boulder City during the past two seasons. This school year, the girls’ basketball team reached the state final and the Lady Eagles advanced to the Final Four state tournaments in volleyball and softball.

The boys bowling team won the state championship, while the girls advanced to the playoffs. The baseball team reached the region playoffs this season and was state runner-up a year ago.

The boys and girls swimming teams repeated as state champions this May, and the two tennis and golf teams had individuals with success as well as team success. The two cross-country teams were always in the hunt for the titles in major meets.

“The new league and competition has been good for Boulder City and staying in Division I-A is the right decision. The new alignments will not affect cross-country or most of our teams,” head coach Canaan Petersen said. “For most sports it means two more league games or matches and added competition. It doesn’t matter that there are three new teams in the region.”

The schools from the old Class 3A alignment of three years ago — Boulder City, Faith Lutheran, Moapa Valley, Virgin Valley and Pahrump Valley — have all done well against the larger schools.

Team Boulder wrestling remained among the better programs in the state.

“Wrestling against larger schools and bigger athletes will only make us better,” coach Jim Cox said. “We want the best competition, and we welcome the challenges.”

The boys and girls soccer teams and the track and field teams had the toughest competition and did not fare as well against the larger schools the past two seasons in the region and state playoffs.

The boys basketball team has been undersized, but has stayed competitive with hustle and defense.

“I am excited about the addition of Del Sol to our league and getting two more division games. Our league will be getting more competitive and that is great for our kids and our program,” head basketball coach John Balistere said.

According to the rubric, in Division I-A, schools with more than 149 points are subject to move to Division I. Five schools — Boulder City, Moapa Valley, Virgin Valley, Faith Lutheran and Pahrump Valley — have the option to remain in Division I-A because of lower enrollment numbers.

The rubric takes into account schools’ finishes in 20 sports in each of two seasons and assigns point values to those finishes. The point totals are used in a two-year cycle to determine the next two years’ alignment.