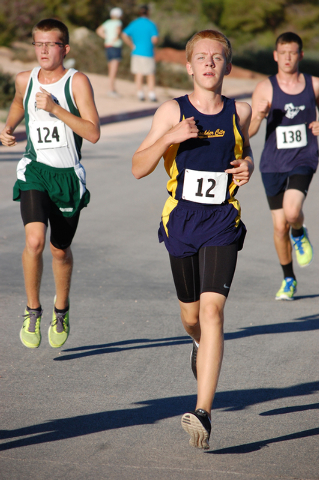 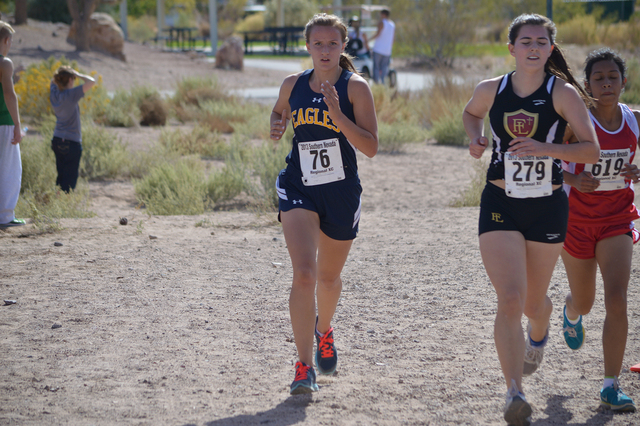 Despite graduating four of the top runners in the program, Boulder City High’s boys and girls cross-country teams are again poised to have successful seasons when they start Sunrise League competition in September.

At least, that is how coach Canaan Petersen sees it.

“I believe we are looking at another good season ahead this year,” said Petersen, entering his fourth season as the coach of both squads. “We graduated some pretty special kids, but we have a lot of youth that love running and I think we will do very well again.”

The boys have advanced to the Division I-A state tournament three seasons in a row and the girls have had some individual bright spots each season. Both squads have had winning records the past two seasons since the NIAA created the new Division I-A alignment.

But gone from those teams are Chandler Harkins and Evan Klouse, as well as Maddie Sargeant and Niquel Nussuer.

“We lost several key seniors both on the boys and girls teams, but with the help of the freshmen that are coming in, the goal remains the same as it is every year. We want to make it to state as a team so that all the athletes qualify,” Petersen said.

Petersen’s confidence stems from the athletes he has returning.

On the boys team, Joren Selinger and Tyler Campbell are the top returners.

“Even though they are underclassmen, both learned a lot from two great leaders (Evan and Chandler) who graduated last year,” Petersen said. “Joren and Tyler will lead the team both on and off the course. They have done so this summer, so far.

“The team picks up three freshmen this season in Sam O’Berto, Tyson Morris and Dawson Goodfellow.

“I can’t wait to see how the team does this year,” sophomore Campbell said. “Even though we no longer have Evan and Chandler, I have confidence in all the freshmen and returning runners. The team’s No. 1 goal is to make it to state tournament again this season and I feel like we can do it.”

Teammate Selinger agrees, adding, “The team took a huge loss with Chandler and Evan graduating, but the incoming freshmen are going to be great. They already show a lot of talent and everyone is already working together. We’ll be few in numbers, but I think we can come back and be as strong as last year and reach state.”

“It will be interesting to see how all of the guys compete with each other in practice and then in the meets. We hope to pick up some more runners as we move forward when school begins on Monday,” Petersen said.

The girls squad will be led by seniors Jessica Embro and Aubrey Klouse.

Embro placed fifth in the Sunrise League championship meet and advanced to the state tournament on her own effort.

“We hope to duplicate her state berth and improve on her overall standing in the Sunrise League. I really believe she can do it,” Petersen said. “Aubrey has been organizing practices this summer and she is an emotional leader that is always needed on a team.”

Junior Emma Torgeson returns as a strong runner along with sophomore Sabrina Snow.

But just like the boys team, the girls have added some freshmen, including Sierra Selinger and Camille Torgeson.

“We lost two great runners, too, but I also feel we can have a great season,” senior Klouse said. “Although we lost Maddie and Niquel, I am looking forward to this coming season because of the abundant potential I see out of our new freshmen. We are a very tight-knit team that motivates each other through grueling runs.”

Petersen is still looking to expand the squad.

“I also hope to be able to get some more athletes to come out once school begins,” Petersen said. “We hope to add some more girls to the team and make sure the team is injury free as much as possible. But I like our chances.”