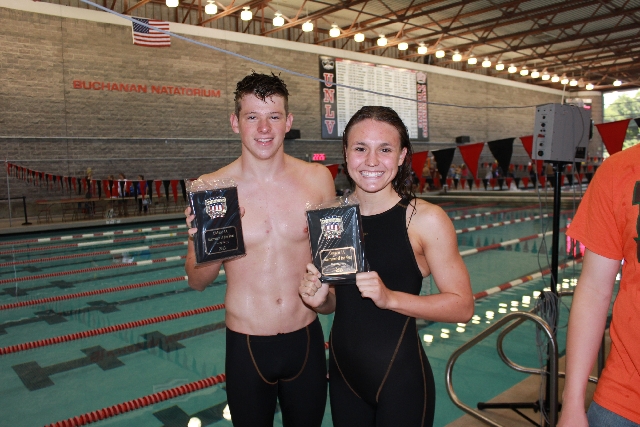 The closest race of the day was between Boulder City’s Grothe and Aubrey Klouse, who ended up tying each other in the 100 backstroke, further demonstrating how dominant the Eagles were in the pool.

In addition to the double winners the boys also saw sophomore Sam Sauerbrei win the 200 individual medley in 1:58.72 and senior Gunner Braden win the 100 breaststroke in 58.94.

Coach Lara Carroll said she knew all along both teams would dominate regionals but she was happy to see the whole team finish their season strong.

“I was just really happy there were so many time-drops (from prelims),” she said. “Some from our state qualifiers, some from those that barely made state or didn’t even qualify, but they had a great meet at the end of the season.”

With the girls taking their first regional title and the boys nabbing their seventh and third in a row, Carroll sees a bright future for both swim teams.

“I’m very happy because the girls never got to be a regional champ and the guys have, so I think this is the start of something we’re going to keep doing,” she said.

Although it was the second time Hubel won Swimmer of the Year, it didn’t make winning the award any less enjoyable.

“It is very cool,” she said. “Because it is sophomore year, it is crazy; it is a really cool experience.”

Being on a team where a lot of the attention is on other swimmers, the Swimmer of the Year award caught Smith off guard.

“It was pretty cool, I wasn’t expecting it; I didn’t really know they had it really,” Smith said of his award.

Coach Carroll explained that Hubel and Smith were worthy of their awards and still have potential to get even better.

“I’m so glad. They both work really, really hard and they got a lot of potential, so it’s awesome,” Carroll said

Looking toward state the general consensus is that similar results will unfold up north, as a clean sweep is also expected.

“It’s (state finals) probably going to be about the same (result) but it’s going to be really fun because we have such a great team. I’m really looking forward to the team aspect, but we will be at the top again,” Hubel said.

Carroll is as confident as she has been all season about her squad. When she was asked if she had any worries about state she said, “Nah, not really, I think we’re pretty comfortable about that state thing.”

The state championships will be held Saturday at the Carson Aquatic Facility in Carson City.

The boys won the past two state championships against bigger schools such as Coronado, Green Valley and Bishop Gorman before realignment this year. The girls were runner-up to Bishop Gorman last year.