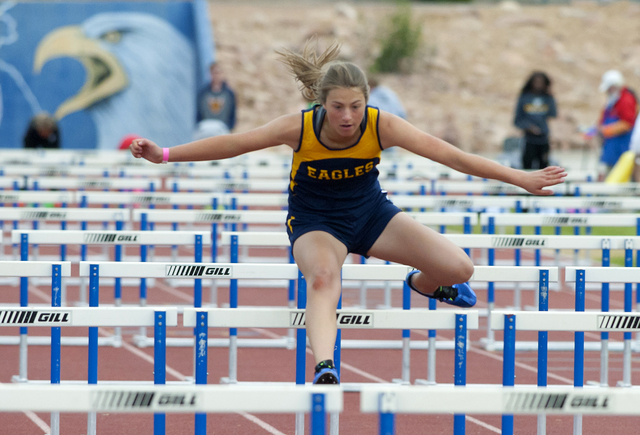 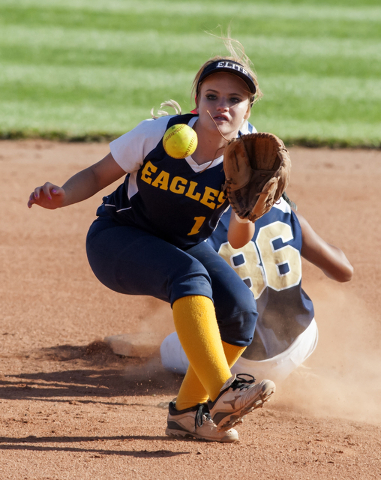 Cowley will compete in shot put and discus. He placed second in shot put after throwing a distance of 49-03.75, and placed fourth in discus with 148-10.

For the girls team, Robinson, Miller, Mullins and Jeppsen will compete in the 4×800 relay after placing third with a time of 10.25:18.

Gneiting and Daly will compete in shot put after placing second and fourth, throwing 34-03.50 and 33-05, respectively.

Fenyves will have one more chance to reach a distance of 34 in triple jump after placing third with 33-11.50.

The I-A track and field state meet is Friday and Saturday at Palo Verde High School. On Friday, the meet is scheduled to start at noon, while Saturday it will start at 8 a.m.

The Lady Eagles softball team’s season came to an end Friday after a fairly successful season.

After the Lady Eagles win over Cheyenne on May 5, Boulder City hosted Faith Lutheran in the winner’s bracket in the semifinals Wednesday.

Masterson pitched another complete game, throwing 105 pitches, 75 for strikes, and 15 strikeouts. She also had the only two RBIs for the team.

Boulder City advanced to the loser’s bracket semifinals to play against Spring Valley on Friday, where the girls lost 5-1. The loss was the Lady Eagles’ second in the double elimination-style tournament, marking the end of their season. Embro said Boulder City was too relaxed during the game, and it was difficult for the team to get hits. Even their strongest hitters couldn’t get on base.

Embro said she hopes the team learns from this season, and comes out strong next year to accomplish what it couldn’t this year.