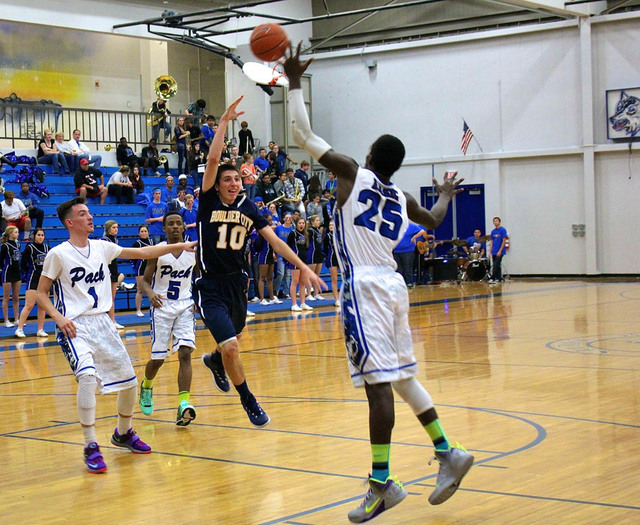 The Eagles defeated West Wendover 56-52 in the third-place game Saturday afternoon. Newby averaged 14 points in the four games and Carmell’s defense and rebounding helped the Eagles.

“I was real happy with our effort in the Lake Mead tournament,” Boulder City boys basketball coach John Balistere said. “Playing four games in three days is not easy but the kids hustled and worked hard. We found a rhythm and played well in those four games.”

The Eagles played in the first round Dec. 4 and defeated the Adelson Campus 66-46. Newby and Zach Murphy each scored 11 points to lead the Eagles past the Lions. Quentin Turner added 10 points for Boulder City, which outscored the Lions 25-8 in the second quarter to pull away.

Boulder City then split a pair of games Friday, defeating Calvary Chapel 50-42 before losing to The Meadows 64-48.

Against Calvary Chapel, Newby had a team-high 15 points and Carmell added 13 points. The Eagles held a 24-20 lead at halftime and used their defense to secure the game in the fourth quarter. The Meadows’ Asheesh Chopra led three double-figure scorers with 20 points to send the Mustangs past the Eagles. The Eagles’ defense could not stop the outside scoring of the Mustangs and suffered their first defeat of the season. The Meadows outscored Boulder City 41-25 in the second half.

In Saturday’s championship round, the Eagles’ victory over West Wendover secured the third-place title.

“It was a competitive tournament and we got a lot out of it,” Carmell said. “Being chosen to (be on) the all-tournament team was an honor.”

The Eagles, however, didn’t fare well Monday, losing 68-47 at Basic, which is in Division I. The Eagles led early, 6-2, before a 16-2 run by the Wolves opened the game. The Eagles were never closer than 7 points.

Carmell’s 3-point shot with 5:18 remaining in the third quarter closed the Eagles’ deficit to 40-33. Neither team scored during the next three minutes before a 10-4 run by Basic gave the Wolves a 50-37 advantage heading into the final quarter.

“We let the Basic game get away from us,” Balistere said. “We were overmatched and made way too many turnovers. We also did not handle their press or rebounding very well. But we are now 4-2 and I like where we are as a team heading into the first week of league play.”

“We have a week of practice in between Basic and Del Sol and they will see a different team next week when we play our league games,” Balistere said.

“We have a few new things we are adding and we will be a surprise to many teams in our league.”