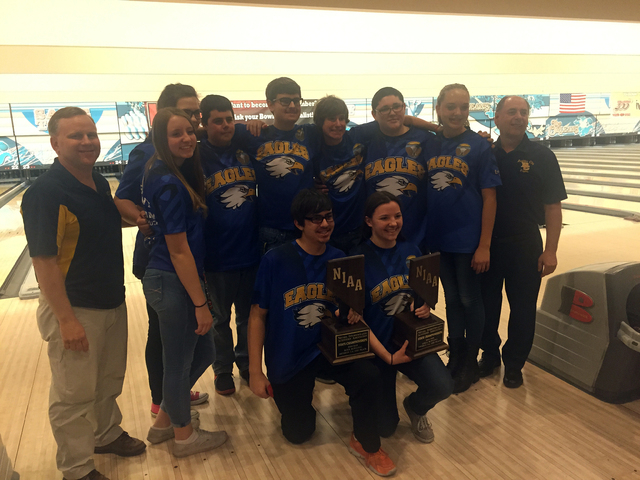 For the boys bowling team at Boulder City High School, it was a bitter end to an otherwise successful season. For the girls, it was a near-Cinderella story that nobody expected to happen when the season began.

In the end, both teams fell short during their final match of the Division I-A State Bowling Championships on Tuesday at The Orleans.

The boys team preached the importance of spare shooting all season long, but a massive amount of splits, including 10 in the second game alone, was their ultimate downfall against the Chaparral Cowboys.

Led by David Galvan’s 645 series, the Cowboys swept the Eagles for the state title. They were the only team to blemish Boulder City’s record this season.

“They deserved it. They really deserved it,” said Boulder City junior Dylan Amico. “I feel like we had a great season; we just didn’t bring it together at the end. But it was a great match.”

Chaparral’s first game of 803 was good enough to beat Boulder City by 82 pins. The Cowboys shot only 749 during the second game, but open frames continued to plague the Eagles as they slumped to a 639 finish. Needing to win the final game by 193 pins to win the state title, Boulder City continued to struggle and lost the last game 714 to 708.

“We’d hit the same exact spot as them. They’d get strikes and we’d get splits,” he said. “They had a lot more chances than we did, and their pin action was better. They deserved to win.”

Junior Teagan Smale’s second game of 201 was the only 200 game for the Eagles. His 535 series was high for the team.

Chaparral junior Zach Clark, who bested Smale for the individual state title last season, said the win against Boulder City was long overdue for the Cowboys.

As surprising as it was for the boys to not win the state title, the Lady Eagles were every bit as surprised just to be there. As the No. 4 seed in their bracket once the postseason began, the Lady Eagles defeated The Meadows in the first round.

Boulder City then went on to defeat Del Sol by 11 pins in the semifinals to make it to the state championship against Southeast Career Technical Academy. But running into last year’s state champs proved too much to handle for the Lady Eagles as they dropped all three games to Tech, a team that hadn’t relinquished a point all season.

“The girls were the real surprise because they were a No. 4 seed, so every time they came through they had to beat a better team and did,” coach Rodney Ball said. “This team of girls, they weren’t around last year. One was on JV, and three were new. Two weeks ago they didn’t even know they had a chance at winning state. This is another historic event. It was beyond expectations.”

Bailey Bennett-Jordan’s final game of 186 and total series of 464 were high for the Lady Eagles, who became the first girls bowling team at Boulder City High School to make it past the first round of the playoffs.

“I think we surprised all of us,” the freshman said. “Next year I feel like we can do even better.”

Ball credited the parents for working with the bowlers during the offseason to help improve their game.

“Don (Smale) and Charles (Berkheimer) keep this going through the summer. When we can’t coach them, they go through the summer with them, and that’s only made this team better,” Ball said. “This is still a young team. Next year, the girls and boys … expect them back here again.”