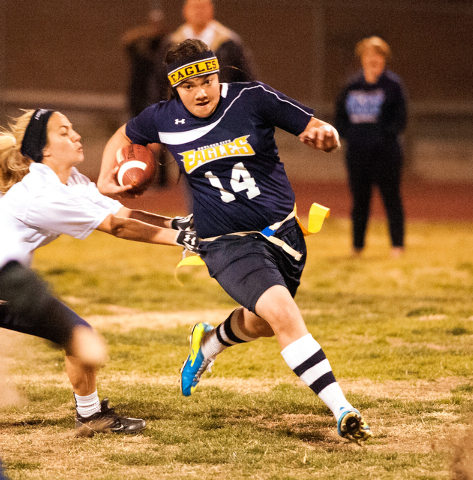 After months of projections and predictions, the final alignments for the next two seasons of high school competition in Nevada are official.

As expected, Boulder City and Faith Lutheran were the only two schools in Division I-A to earn enough points to be promoted to Division I. And, as expected, both schools declined.

“We will stay in I-A even though we had the points to be moved up,” Boulder City Athletic Director Regina Quintero said. “By moving up we would be competing with schools that have an enrollment of two or three times larger and it would not be fair to our athletes.”

This past week, the Nevada Interscholastic Activities Association, which governs high school sports and activities in the state, released the final Nevada rubric scores to determine alignment for Division I and Division I-A schools in Southern Nevada for the 2014-15 and 2015-2016 school years.

While no schools that have competed in the lower Division I-A for the past two seasons will be moving up to Division I, three teams will be dropping down. Del Sol will be competing with Boulder City in the Sunrise League, while Sierra Vista and Spring Valley go to the Sunset League and could be the Eagles’ opponents in the Southern Region or I-A state playoffs.

“I don’t mind the teams that are dropping down because more teams mean more competition and that is good for everyone,” Quintero said. “But it also will be harder for us to score points in the Nevada rubric the next two seasons.”

According to the rubric, in Division I-A, schools with more than 149 points are subject to move to Division I. Five schools — Boulder City, Moapa Valley, Virgin Valley, Faith Lutheran and Pahrump Valley — have the option to remain in Division I-A because of lower enrollment numbers. All five have expressed that they will do so each time.

The rubric takes into account schools’ finishes in 20 sports in each of two seasons and assigns point values to those finishes. The point totals are used in a two-year cycle to determine the next two years’ alignment.

Del Sol did not score a single point during the past two seasons, while Sierra Vista managed seven points and Spring Valley 11.