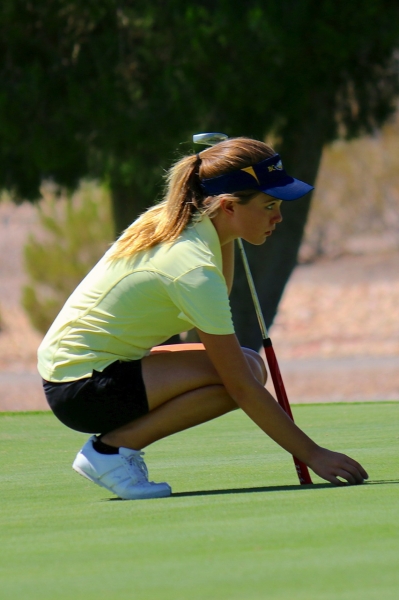 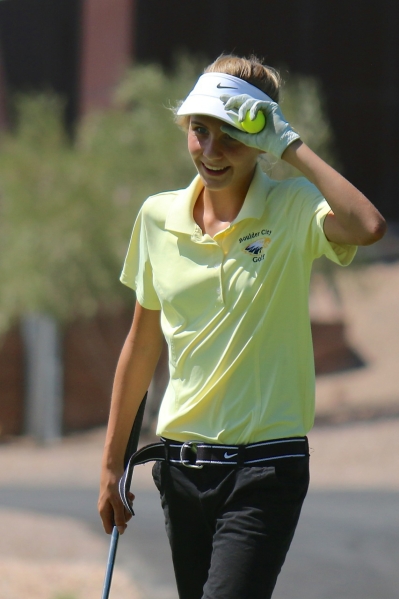 After providing a solid effort in their season opener last week at Chimera Golf Club inside Tuscany to pick up a victory, the girls Bolder City golf program took it up a notch this past weekend, nearly dominating on their home course.

With warm and mild wind conditions at the Boulder City Golf Course, the Lady Eagles was the only team during the Sunrise League match to have four golfers make the 18-hole cut after shooting 60 or better on the course’s front nine.

Placing three girls within the top five, the Lady Eagles were able to hold off a strong effort from Southeast Career and Technical Academy to secure their second victory of the season with a score of 408, while the Roadrunners would settle for 473.

Sophomore Lani Potter continues her strong start to the season, leading the Lady Eagles with the low score of the day with 78, which was good for 6 over par.

Freshman Madisan Walker also had a good day, placing second overall with a score of 99, good for her low of the year, while junior Lauryn Norris also posted a career low with a score of 107 to take fourth overall.

Completing the Lady Eagles score, freshman Ryann Reese posted a personal best on the day with a score of 125, good enough to place her in the top 15 of the event.

Narrowly missing the 18-hole cut by 3 strokes, junior Holly Pipper showed great improvement throughout the day, cutting down her nine-hole score down by 5 strokes, compared to the season opener.

While the Lady Eagles currently sit atop the Division I-A Sunrise League, head coach Andy Schaper still feels his budding juggernaut can be even more impressive.

“All of the girls played well last week and continue to improve each week,” he said. “They have put in a lot of hard work and effort that is paying off as the season moves forward. Next week at Boulder Creek it is the team’s goal to have five 18-hole scores posted.”

Taking their 2-0 record up a division next week, the Eagles will face Division I opponent Green Valley High School on Monday at Boulder Creek Golf Club.

This past weekend the Larry Burgess-Las Vegas Invitational at Sunset Park wasn’t very kind to the Boulder City boys and girls cross-country programs, with the girls settling for a tie for ninth place and the boys claiming 10th. Still Boulder City head coach Canaan Petersen believes there’s been improvements made from last week’s meet at Moapa Valley.

“The team ran a lot better overall and at times improved tremendously from the last week’s contest,” Petersen said. “For the next two weeks, we will be working extra hard to put in the effort before we hit October and eventually tournament season.”

In the girls race, the Lady Eagles were forced to race without lead runner sophomore Sierra Selinger, who was out of the contest because of illness.

With their sensational sophomore out, senior EmmaLee Torgeson would take the lead for the Lady Eagles, finishing 10th in the race with a time of 22:32.1 on the 3.1-mile course.

“The girls were able to do well, despite the loss of their lead runner,” Petersen said. “Emma is doing a great job leading the squad, staying in the front as much as possible in races as well as practice.”

Also finishing the race for the Lady Eagles would be German foreign exchange student Nantke Bonsack, who finished the event in 22nd place with a time of 24:14.9.

Despite their uneasy finish, the girls still sit third in the Southern Nevada Cross-country Coaches Poll courtesy of Runnerspace/NV.com.

Falling out of the poll for this first time this year were the boys who didn’t have a runner place within the top 20 Saturday.

Junior Tyler Campbell led the way for the Eagles with a time of 18:06.7, good enough for 21st place on the day. Senior Joren Selinger would follow shortly behind the top 25 to round out a learning experience for the boys team.

“The guys put in a solid effort, while we are still working out the kinks,” Petersen said. “Joren Selinger is doing a great job leading our boys and I believe they will steadily improve as the year progresses.”

The Lady Eagles soccer team dropped its opening contest Sept. 11 to Basic by a final score of 4-0.

The win moves the Wolves to 2-0 on the season.

The season didn’t get off to the start that head coach Duncan Stark and the team had hoped, but a refocused and refueled Lady Eagles team will try and turn things around when its traveled to Chaparral on Wednesday. Results of the game were too late to be included in this issue.

Boulder City returned 11 letter-winners from last season’s squad, including nine starters. Last year’s team came into the season very young and raw with talent, and their 2-11-2 record proved that to be the case.

The Lady Eagles’ sixth-place finish in Sunrise League play wasn’t what the team had envisioned, but returning as many starters as they did, including leading goal scorer Oshauna Remy, is an encouraging place to start the division climb.

“The team is looking strong this year, only losing two players to graduation,” Stark told the Las Vegas Review-Journal. “While still young, this group has played together for two years, and it shows in practice. The team goal this year is to make the playoffs, as we plan to surprise a few teams this year.”

The time to surprise Sunrise teams will need to happen quickly as nine of the Lady Eagles’ next 11 games are against division opponents.

The Boulder City High School volleyball team has gotten off to a hot start, despite what its 5-4 record might indicate.

After opening the season at the Las Vegas Invitational, where the Lady Eagles dropped its first three matches before winning four of its next five matches, they faced off against Basic on Sept. 10.

In 2014, the Lady Eagles went 24-9, including 8-1 on the road and 13-1 in Sunrise play, and made the playoffs. After defeating Pahrump Valley, Boulder City fell to Sierra Vista in the second round to end its season.

Hinman said the team’s goal this year is to finish at the top of the league and qualify for state. BCHS will open up league play at 6 p.m. today at home against Del Sol.