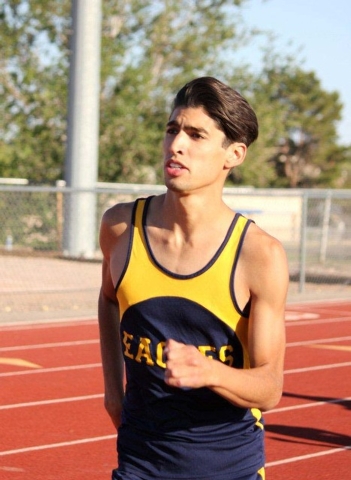 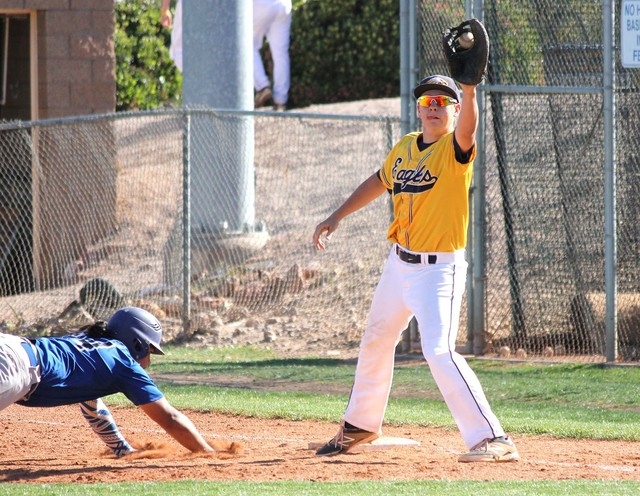 Boulder City’s baseball team defeated Tech 6-­0 Tuesday to avenge an earlier loss and clinch the No. 2 seed in the Southern Region Tournament that is scheduled to start Tuesday.

Boulder City, which concludes its regular season at 3:30 p.m. today at home with Senior Day against Sunrise Mountain, owns the first two tiebreakers against Tech should they end with the same league record.

But Boulder City head coach Bobby Reese would like to see his team skip the tiebreaker process by defeating Sunrise Mountain today.

“We own the tiebreakers, so we are the No. 2 seed, but we need to win to maintain the momentum,” Reese said. “If we are ready for the playoffs, we should take care of business.”

Against Tech, Peyton Koopman went 1-­for-­2 with two runs and an RBI and combined with Nick Giunta and Austin Shepard to pitch a five-­hitter. Mario Castanon was 1-­for-­4 with a run and three RBIs.

“By being the No. 2 seed, we have at least one game at home and could get a second one,” Reese said. “We would also avoid playing higher seeds across the bracket like (Sunset League champion) Faith Lutheran until the later rounds.”

The Division I-­A Southern Region final is May 17 at Mojave High in North Las Vegas. The region is a double-­elimination tournament and both the champion and runner­-up advance to the state’s four­-team championship tournament.

The Division I-­A state baseball tournament will be May 22-24 at Bishop Manogue High School in Reno and at Peccole Park at the University of Nevada­, Reno.

The Sunrise League Track & Field Championships and the Division I-­A Southern Region Championships will be this week at Sunrise Mountain High in Las Vegas. The finals are May 17.

The state championship is May 23 and 24 at Carson High in Carson City.

“We have a couple of athletes that have worked very hard all season and the next two weeks will be the pay off,” Eagles team captain and sprinter Yann Moncayo said. “We are really excited for the region tournament to begin. We have been pushing each other in practices to improve as much as we can each day.

“The seniors want to leave at the top of their game.”

Moncayo will lead the sprint and relay events, while senior Jacorey Dixon and junior Brooks Roe are expected to do well in the 300- and 100-meters hurdles.

Samuel Gomez also is a favorite in the discus.

In the girls’ competition, seniors Whitney Barlow and Jana Williams are among the best in the 300 and 110 hurdles. Emma Torgesen is ranked high in the 1,600 meters and Arianne Hess is among the favorites in the triple jump.

Barlow and teammate Katlyn Daly will do well in the shot put, and Boulder City’s 4×400 relay team and its 4×800 relay are expected to place high.

The region will be played Monday at Primm Valley Resort’s Lakes Course and at the Wildhorse Course on Tuesday.

The Division I-­A state championship tournament is May 21 and 22 at Mountain Falls Golf Course in Pahrump.

On Tuesday, Logan shot a 5­-over-­par 76 at Las Vegas National to help Boulder City win its final Sunrise League match. Atkinson shot 80 and Ulibarri shot 82 to lead the Eagles to a 411 team score.

“Overall, I’m happy with this scores considering the difficulty of the course and the playing conditions (Tuesday),” coach Regina Quintero said. “At this point of the season all players, top to bottom, are hitting the ball well.

“It is nice to see the four to eight top players battling for the final spots on the traveling team. It is also nice to see some of the other players scoring well, so the regional and state tournaments won’t be on the shoulders of only one or two players.”