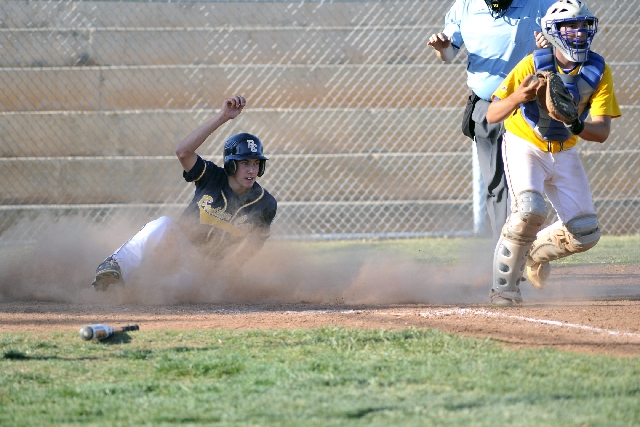 Boulder City baseball and softball teams have wrapped up the inaugural 1-A Sunrise League championships, securing top-seeds and some home games when the playoffs start Monday.

“All this is expected,” said senior Tanner Howell, who struck out nine and walked three while scattering nine hits in the six-inning victory. “We’re not done yet, that’s for sure.”

Boulder City won the league title last year, only to be defeated at home by Moapa in the league championship game, something the team hasn’t forgotten.

“It felt really good to come back and beat them after (the) last time we played them on this field (and) they beat us to end our season,” said senior Corbett Fleming, who went 3-for-5 with a double and four RBIs. “It’s good to be league champs, and beat Moapa for it.”

Coach Bobby Reese said the team is focused on getting to the state tournament, which begins May 16.

“We just won the league and there’s no celebration,” Reese said. “We know our goal was not to win the league but to get to the state tournament. Now we’ve set ourselves up to have a good draw.”

Capturing the league early will allow Reese to set the pitching rotation behind Howell.

“This gives us a chance to see different guys on the mound besides Tanner,” Reese said. “Those guys are going to have to get us to the state tournament. Bottom line is we’ve got to win games with other guys on the mound.”

The Eagles got a strong performance from freshman Peyton Koopman on Monday, who surrendered one run on one hit in six innings in a 6-3 home win Monday against Southwest Career and Technical Academy (11-7, 5-5).

The team finished the regular season Wednesday at Sunrise Mountain (6-14, 3-7).

While the Eagles have gone through league play unbeaten, the team has had to win close games against Desert Pines, Chaparral and Tech.

The Eagles will have to win at least four games or as many as six to win the double elimination Southern Region tournament, which starts Monday.

Boulder City will face the No. 4 seed from the Sunset League, likely Cheyenne, at 3:30 p.m. If the team wins, they will host a second round game at 3:30 p.m. Tuesday. The tournament then shifts to Faith Lutheran with the championship May 10.

The top two teams from the eight-team tournament advance to the four-team state tournament May 16-18 at the College of Southern Nevada in Henderson.

Senior Kasey Ochoa went 2-for-4 with two RBIs, and the Lady Eagles took advantage of six errors to win the run-shortened game in five innings.

Senior Jessica Holling went 2-for-3 and sophomore Alyssa Ybarra went 2-for-4 in the win.

On April 25, freshman Charlene Masterson went 2-for-3 with a three-run home run and tossed a five-inning three-hitter as the Lady Eagles downed visiting Moapa Valley (11-11-1, 7-4), 13-3. Holling added a homer run, and senior Alex Frye went 2-for-4.

Holling had a strong game Friday, going 2-for-3 with a two-run homer in an 8-4 loss at Foothill in a nonleague game.

The top-seeded Lady Eagles will host, most likely, Mojave from the Sunset League on Monday at 4 p.m. in the opening round of the Southern Region tournament. The double-elimination tournament runs through May 10 at Faith Lutheran.

The top two teams from the eight-team tournament will advance to the four-team state tournament May 16-18 at the University of Nevada, Las Vegas.

The Eagles didn’t have their best effort in recent weeks, but still managed to come away with an easy league win.

Sophomore Luke Logan shot a 3-over par 75 to share medalist honors April 24 at The Palms.

Senior Tyler Barton carded a 79, senior T.J. Hatfield an 83, junior Chris Fairchild an 84 and junior Kyle Effertz an 83 to round out scoring.

The team’s score, 409, was its highest in two league matches, but was without two of its regular golfers.

Coach Regina Quintero said that while Logan’s slot as the top golfer is set, the last five spots and order still needs to be decided.

“I will have to make a decision on the top six players, who will be competing in the regional and/or state tournaments,” she said. “We need to continue to get a lot of time on the course actually playing and working on small parts of our games. It will come down to the short game, chipping and putting which will determine first and second place in both the regional and state tournaments.”

The team has its final league match today at the National.

The two-day Southern Region tournament starts Tuesday at the local Municipal Golf Course, then transfers to the Mountain Falls Golf Club in Pahrump on Wednesday.

The top three teams and top five individuals from nonqualifying teams advance to the state tournament May 14-15 at Sierra Sage in Reno.

The boys track team finished the season on a high note Friday winning a four-team meet in Mesquite.

Junior Jacorey Dixon won the 110-meter hurdles and 300 hurdles, as Boulder City won seven of 18 events in the meet.

On the girls side, senior Emilia Oscilowicz won the discus, and freshman Emma Jeppsen won the 800 for Lady Eagles’ two individual wins.

The Southern Regional championships starts Tuesday with trials, and the finals May 10-11 at Sunrise Mountain.

The top four qualifiers from each event advances to the May 17-18 state meet at Silverado.