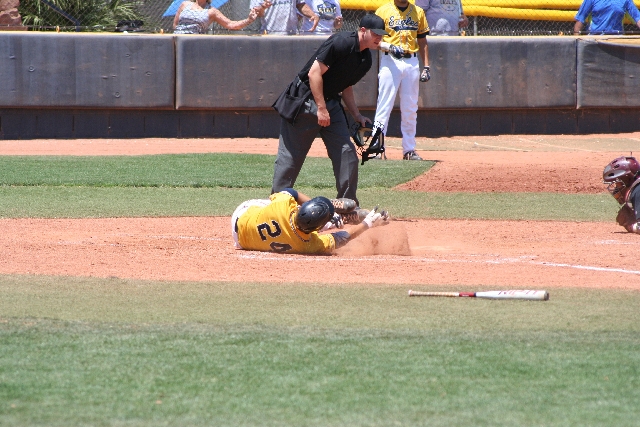 Maybe it was mental fatigue. Maybe it was emotional exhaustion. Whatever it was, Boulder City committed three errors in the sixth inning Saturday afternoon against Faith Lutheran, opening the floodgates that turned a game tied at 3 into a 14-3 loss.

“As soon as Faith put the pressure on us, it’s 14-3,” senior Billy Barth said. “It was 3-0 and everything was going fine. As soon as they step on our throats we step down.”

The Eagles took a 3-0 lead into the fourth inning off RBI sacrifice fly by Barth and an RBI single by freshman Peyton Koopman in the first, and a second inning RBI single by Tanner Howell.

The Crusaders scored two runs in the fourth and tied it in the fifth. The error-prone sixth and seventh allowed five of the 11 runs to be unearned.

The team entered the winner-take-all game after defeating Faith Lutheran 7-6 in the first game of the morning, forcing the deciding game. It turned out to be the only win against the private school by Boulder City in six games this season.

“Very happy how we battled today and took that first game,” first-year varsity baseball coach Bobby Reese said. “They could have come out and laid an egg and they didn’t. They fought and won that first game.”

The Eagles entered Saturday needing to win two games against Faith Lutheran after losing to the Crusaders 4-3 Friday in the winner’s bracket final.

Howell, the Eagles’ top pitcher who is signed to play at Dixie State in St. George, Utah, next year, threw 127 pitches in 6-1/3 innings, striking out 11 in Friday’s loss.

With the game scoreless in the fourth, senior Tino Ragone drove a two-out RBI triple to right field for a 1-0 lead. After Faith Lutheran tied the game in the bottom of the inning, Barth hit a two-out two-RBI double to right field in the fifth to take back the lead.

The Crusaders answered back with two runs in the bottom of the fifth. Howell settled down in the sixth, striking out two batters, and another to start the seventh. After walking the next two batters, Peyton Koopman was brought in to end the threat.

However, Faith Lutheran’s lead-off batter walked in the eighth inning, and scored two batters later from third on a sacrifice fly to center for the win.

Reese put Peyton Koopman back on the mound, and he responded throwing a three-hitter to keep the Eagles alive with a 6-1 win.

Howell had a two-run RBI single as part of a four-run third inning, and senior D.J. Koopman added a double in the win.

It was the second tournament win against Elko. The Eagles opened the state tournament Thursday with a 16-5 win over the Indians, lead by five home runs. Howell had two homers, including a second-inning grand slam, and 7 RBIs; Barth added two homers, and D.J. Koopman had one.

The team had only hit four homers all season.

However, with Howell pitched out and Peyton Koopman having thrown 8-2/3 innings Friday, Reese turned to a patchwork of pitchers Saturday morning against Faith Lutheran. Junior Taylor Wold, sophomore Nick Giunta, and senior Billy Barth combined before Reese turned to Peyton Koopman once again to preserve the win.

After falling behind 3-0 in the first, the Eagles answered with three in the second inning. The Crusaders took the lead again in the third inning, but Boulder City scored three in the fifth and one in the sixth for a 7-4 lead. Two Faith Lutheran runs in the sixth cut the lead to one, and the Crusaders got a runner to third in the bottom of the seventh before a diving catch by senior Joe Miller in right field preserved the win to force the second game.

“I saw the ball in the air and I thought I wasn’t going to get to it at first,” Miller said. “The ball carried a little bit and I got there.”

“I am really proud of the way our team came out,” Miller said Saturday. “It would have been real easy for us after we lost that first game yesterday to just roll over and crown ourselves public school state champions, and not even worry about today.”

Some of the coaches and players after the championship game declared themselves the 1-A public school champions, pointing out that the tuition-based Faith Lutheran chooses from a wider population base and can offer financial aid to lure athletes to its school.

“We’re very proud to be the public school state champion,” Reese said. “They’re just deeper than us. When they can draw from 150,000 people in Las Vegas and we can draw from 15,000, that’s what’s going to happen.”

Barth was not one of the players who found comfort in that argument.

“I don’t care if they’re a private school,” Bart said. “We should still be competing. We shouldn’t be falling apart like we did.”

The Eagles ended the season 25-11, going unbeaten in Sunrise League play in its first season under realignment. The team’s Southern Region competition grew from three teams — including Virgin Valley and Moapa Valley — to 13 teams, including larger Southern Nevada schools such as Faith, Chaparral and Pahrump Valley. It was the schools fifth state runner-up finish against six state championships.

D.J. Koopman, who joked before walking to the plate with two outs in the seventh inning of the final game, “Of course it’ll be me to make the final out.” After striking out, he kept the overall season and state experience in perspective.

“Senior year’s been great,” said Koopman, who garnered first-team, all-state awards in football and started on varsity basketball. “Baseball is by far one of the funnest seasons that I’ve had here. This year was just a blast.

“Sometimes things don’t go your way and how you react to that, taking away the positives.” 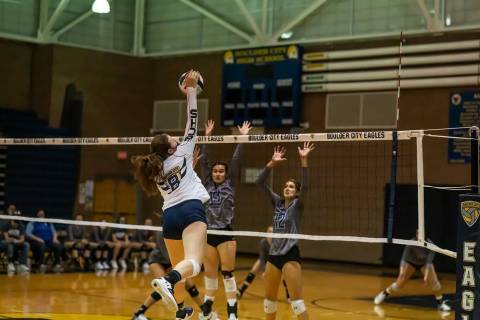