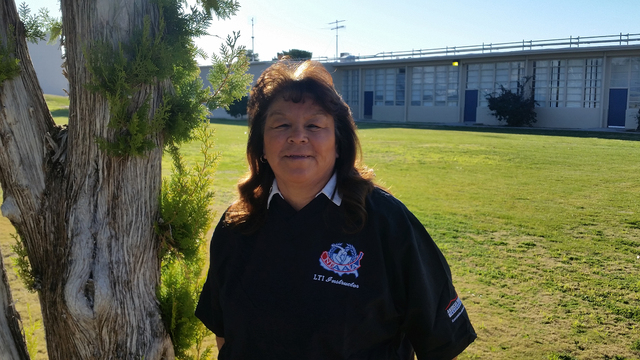 Quintero spent more than 20 years as a physical education teacher and coach, and has been the school’s athletic director for the past seven years. She will retire at the end of next school year.

“There are high expectations that come from this office,” she said. “Everyone from the top down knows what the expectations are.”

After graduating from UNLV in 1987, Quintero completed her student teaching at Boulder City High. She was familiar with the small-town atmosphere. She went to Mineral County High School in Hawthorne where there were about 60 seniors in her graduating class.

And with few sports to choose from in a small high school, Quintero focused solely on basketball. After finishing college, she said coming to work at Boulder City High School was the “easiest decision” she ever made.

Since she arrived in Boulder City in the late 1980s, Quintero has coached softball, volleyball, basketball and golf. And, after former Athletic Director Bob Northridge took Quintero under his wing, she began to see the importance of a successful athletic program from both a coaching and an administrative angle.

“I think it was the ability to be able to cooperate and work with others,” she said about the most important lesson Northridge gave her. “Even though they might disagree with you, the bottom line is that there is a job and competitions that need to get done.”

Since Boulder City is a tighter community, Quintero said the involvement from parents, teachers and coaches have all helped cultivate a winning culture throughout the town.

“It’s a philosophy that comes from the top down. We’re all on the same page,” she said. “Our philosophies are teaching kids right from wrong, good sportsmanship and competitiveness.”

Quintero said the students’ success on the field is intertwined with their success in the classroom. Knowing what is expected of them, and applying it to both sports and academics, has helped Boulder City become one of the most successful high schools in Clark County.

“I think it’s a lot easier to teach those lessons when they’re on the field, or the court, or whatever sport they’re in. Especially at this school. People are here and they don’t leave,” she said.

A strong group of passionate coaches has helped improve the school’s athletic program, Quintero added. The countless hours they spend riding the bus to matches, and the extra work they put in every week at practice have helped push their programs further along.

“I think all of our coaches are pretty passionate about their sport. When they’re passionate about what they do, that’s half the battle,” she said. “You’ve got to hire people who are somewhat on the same page. We’ve gone out of our way to make sure that philosophy is put to our coaches.”

Quintero said the district’s upcoming discussions about another possible realignment could pose a difficult task for her replacement, Alex Moore. However, she’s confident that his year-and-a-half long training will be beneficial once she departs for good.

“Alex has been very involved in sports and the community,” Principal Amy Wagner said. “Doing it in-house was important to us.”

The success of the lesser-known sports like swimming, bowling, and most recently girls’ flag football, are all accomplishments Quintero said she is most proud of.

“Boulder City is a little different because you have such involvement. I think that’s one of the most unique things about this school,” she said. “The town and the school have worked out a happy medium, and one of the major reasons is because they know the expectations. Everyone is aware of what is expected.”

Wagner worked closely with Quintero when she first arrived at Boulder City High School, and commended her for the ability to make her student-athletes well-rounded.

“Regina has had an amazing impact at our school. She’s very involved with the community, the students, and the school as a whole to increase participation in sports,” Wagner said. “There’s not another one out there who has the knowledge she does. It’s going to be very hard for her to be replaced.”