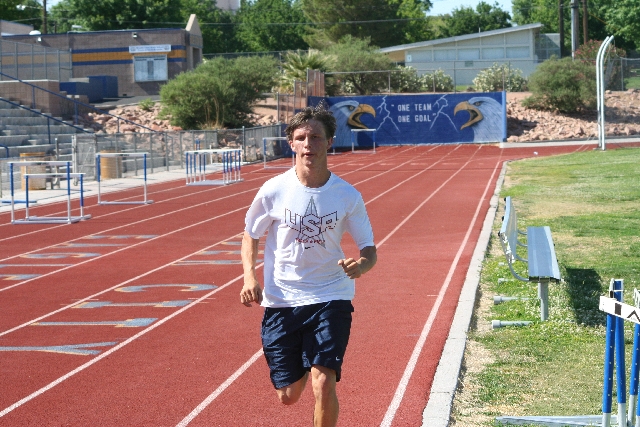 Despite not winning a single event, the Boulder City boys finished fourth in the team scoring in the Southern Region Division I-A Championships May 10-11 at Sunrise Mountain. The girls placed fifth in the 13-team region.

The top four finishers in each event in the regional advanced to this week’s state.

“Given the fact we did not win any events, the boys team put forth a great effort to score as many team points as we did and finish fourth,” said Eagles coach Josh Fisher. “There was only 13.5 points separating us from first place. It was a tough meet and we were right in it.”

“We had a lot of good performances like Chandler (Harkins), Jacorey (Dixon) and others and if they do well at state, we can score points and place well again,” Fisher said. “Overall, in looking to the future we have a lot of kids that just missed qualifying for region and state that are underclassmen. With harder work and focus, I feel our team’s future is bright.”

“We had a lot of strong performances throughout the meet in several events,” Harkins said. “I hope we can do even better at the state meet.”

“Qualifying for state is always exciting,” Nilsen said. “My teammates and I hope we can have our best performances of the season at state. If we all do well, we can score enough points to do well as a team.”

Junior Whitney Barlow was second (47.86) in the 300 hurdles and fourth in the shot put with a toss of 32-08. Senior Emilia Oscilowicz was third in the discus with a throw of 95-04. Senior Heather Phelps jumped 31-02 to grab fourth in the triple jump.

Sophomore Luke Logan ran away from the field to win the 1-A Southern Region individual golf title May 7-8. Logan shot a 1-under-par 72 at Boulder City Municipal the first day, followed by 4-over-par 76 at Mountain Falls Golf Club in Pahrump the second day to win by nine strokes.

However, the Eagles team was unable to hold onto a 4-stroke day-one lead, falling to Faith Lutheran by 27 strokes with a 839.

The Crusaders, Eagles and Pahrump Valley qualified for the two-day state tournament, which started Tuesday and concluded late Wednesday after deadline at Sierra Sage Golf Course outside Reno.

Logan led the state field by a stroke after Tuesday, shooting a 1-over-par 72, heading into Wednesday’s final round. Senior Hatfield is tied for fourth at 77.

Only the top five scores count toward the team score.