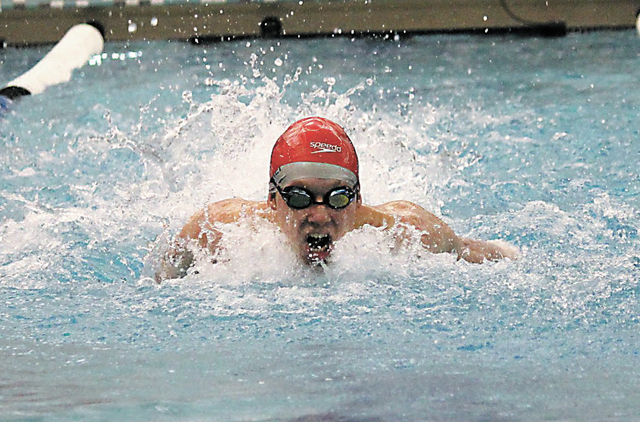 The coach had plenty to be proud of as his swimmers dominated at the Heritage Park Aquatics Center in Henderson. The Heatwave had 248 swimmers competing.

“We had many great swims at the state meet and we had a fantastic team effort from the boys and girls in all our age groups,” Polk said. “It was the largest Nevada State Championships meet ever and the first one run at the Heritage Park Aquatics Center, and I have to say that parents were just as impressive as the athletes. The volunteer parents helped us pull off a fantastic event.”

Senior Jared Smith broke the state meet record for the age group 15-over in the 200 backstroke with a time of 1 minute, 48.87 seconds. He tied for the high-points award for 15-18 boys.

Junior Alex Hubel broke the state’s 15-over age group record with a 50:47 seconds in the 100 freestyle. She broke the 50 freestyle record twice in 24 hours.

“I was happy that both Alex and Jared broke meet records amid their many top swims. Our success in the state meet sets us up very well for the upcoming regional championship meets, such as the 14-and-under Junior Olympics in January and the Southern California Swimming Age Group Championships in February.

“But it also was a great tune-up for our national level swimmers heading into the Chesapeake Elite Pro Am in Oklahoma City, Okla., on Dec. 19-22.”

In the boys 15-18 age group, Smith dominated many events.

Smith was third in the 200 individual medley (1:56.27), while Gebhart was fifth, Sauerbrei eighth and Peterson ninth.

Hubel set one record in the 100 freestyle in an event that Rachael Grothe was seventh and Cori Molisee eighth. She broke the 50 freestyle record (23.55) for 16-year-olds. Grothe was sixth and Molisee seventh.

In the 200 freestyle Hubel was second (1:52.17) when she was touched-out at the wall. Molisee was eighth and Jessica Purdy was 21st. Purdy was 14th in the 500 freestyle and McKenzie Cummings was 21st.