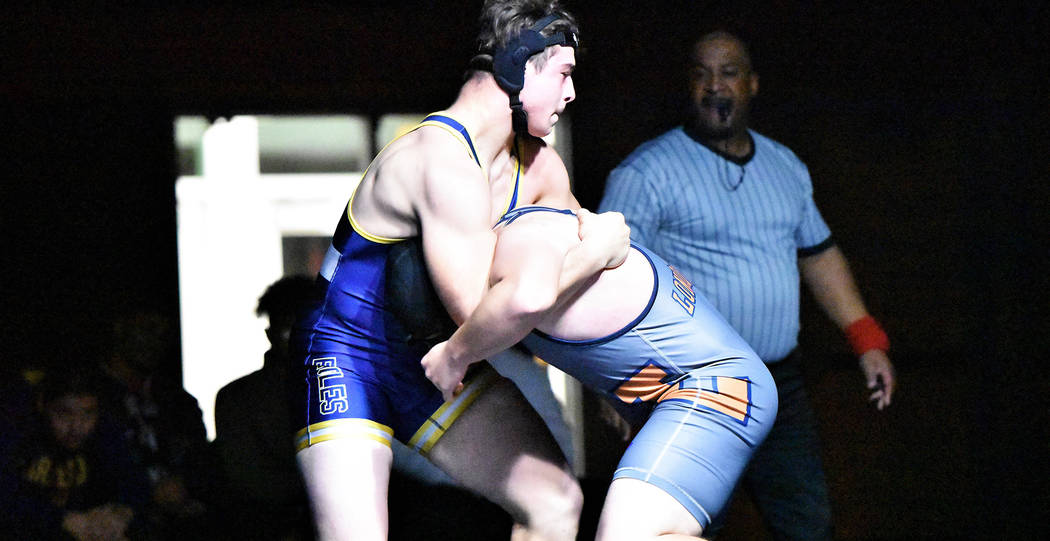 Boulder City High School’s wrestlers took first place in the Boulder City Duals on Saturday, Dec 1, finishing as the only unbeaten program in the eight-team tournament.

In total, nine wrestlers went an undefeated 4-0 for the Eagles.

“The high-quality teams really showed who we are as a team,” senior Thorsten Balmer said. “The competition was great; our whole team came out to compete and it showed. We just need to keep working on improving and focusing on the process as we move further into the season.”

“I think I performed really well in the tournament, but there are many things I need to work on to become the best wrestler I can be,” Balmer said. “Getting my first matches of the season in was also really fun and exciting.”

Continuing to schedule the toughest opponents they can during their preseason slate, the Eagles defeated 4A programs Durango and Legacy on Tuesday, Dec. 4.

Routing the Trailblazers 70-3 and the Longhorns 75-6, the Eagles have now defeated six 4A programs this season.

“We wrestled hard every match,” Dunagan said. “We can’t do anything better than that. The early season victories are good but we are going to take it one match at a time and enjoy the process.”

Picking up a pin falls against Legacy were Balmer, Cowley and Kaposta, while Vanario won by decision.

Against Durango, Balmer and Fortheringham picked up pins as did juniors Jason Krumm (120 pounds) and Curtis Brown (126 pounds) and freshman Ben Schafler (106 pounds).

Continuing their preseason gauntlet, the Eagles will travel to California this weekend for the La Costa Canyon Invitational. They’ll also host Mojave on Wednesday, Dec. 12.