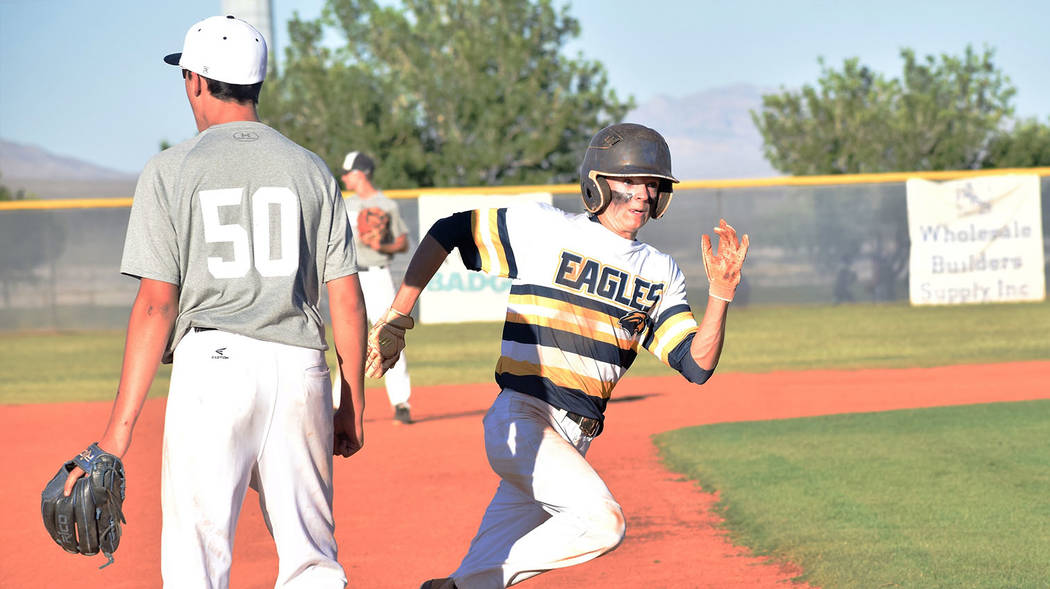 Robert Vendettoli/Boulder City Review Troy Connell rounds third on his way to score a run in the seventh inning against Shadow Ridge on Tuesday for the Southern Nevada Eagles 16U baseball team in the Connie Mack summer league. The Eagles remained undefeated with this 7-1 victory over the Mustangs.

Boulder City’s Southern Nevada Eagles 16U baseball team defeated 4A Shadow Ridge 7-1 on Tuesday, June 19, advancing to 11-0 on the season in the Connie Mack league.

Continuing to play at their best against larger classified competition, the Eagles have defeated Bonanza, Las Vegas and Valley already this season.

“I think the boys are playing awesome right now,” head coach Steve Connell said. “This group has been together for a while and they just go out there and play solid baseball. We’re hopeful to continue to keep this thing moving along and finish with one of the top three seeds for the state tournament.”

Currently sitting in first place atop the American division, the Eagles used a four-run seventh inning to cruise past the Mustangs.

Ahead 3-1 heading into the top of the seventh, Matt Felsenfeld (2-for-4) singled home Blaze Trumble to start the inning. Troy Connell (2-for-3) concluded the inning with a two-run double, scoring Deavin Lopez and R.J. Kilar, who was called up from the 14U team because several players were unable to make the game.

Joey Giunta (2-for-5) provided an RBI double in the fourth inning and a RBI single in the sixth inning.

J.J. Neal and Kilar both finished 2-for-4 at the plate in what Neal called a huge win for the program.

“This is a really big win for us,” Neal said. “Their (junior varsity) team beat us four times this year, so it was nice to get one back. Hopefully, this will give us confidence to continue to play great baseball for the rest of the season.”

Lights out on the mound for the Eagles, Giunta pitched a seven-inning gem against arguably his toughest competition of the season so far. Throwing a complete game, Giunta gained some confidence by striking out nine batters while allowing one run on four hits.

“Defeating a team like Shadow Ridge definitely gives me a lot of confidence,” Giunta said. “It lets me know that I can compete with the big 4A schools. I know we’re going to see a lot more throughout the season, so I feel ready. I know I have a great defense behind me and that gives me a lot of confidence because if I make a mistake or don’t put the ball exactly where I want it, I know they have my back.”

Troy Connell has tallied two wins with 23 strikeouts, while Neal (five strikeouts), Scott Bahde (four strikeouts) and Trumble (seven strikeouts) have each earned a win on the season.

“We’re really deep as far as pitching talent goes,” Steve Connell said. “It’s definitely a strength of ours to have four arms that we believe in to go win us a game at anytime.”

Hoping to stay undefeated, Boulder City will face another stiff challenge Saturday when it hosts 4A Faith Lutheran, which is in second place in the division.