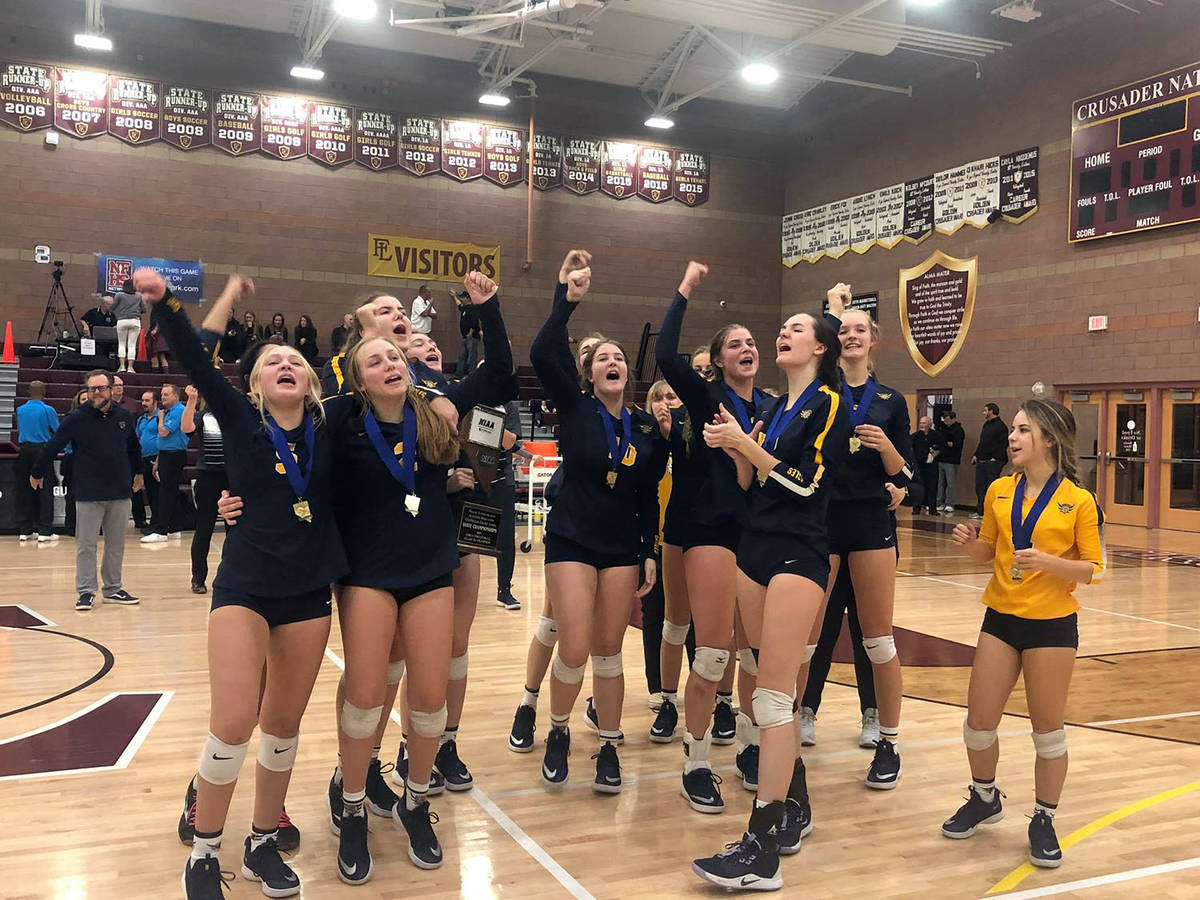 The Boulder City High School girls volleyball team earned its third straight state title in 2019. Due to limitations from the COVID-19 pandemic, there may not be a chance for the team to win a fourth one this year.

On July 23, the NIAA announced the plan to move all high school sports to the spring semester in wake of the ongoing COVID-19 pandemic. The decision came at the same time the Clark County School District decided to only offer distance learning in the fall semester, which eliminated any hope for fall athletics to be played during their normal time and does not guarantee a state tournament.

“Ever since freshman year our goal has been to push to win four state championships,” senior volleyball player Ava Wright said. “After this last year of securing the third, it seemed as though we were in reach of accomplishing that goal. Hearing that we might not be able to compete for a fourth state title is so heartbreaking. We have all worked so hard to get to this point and not being able to compete would be devastating, especially because so many of our players are seniors this year. I hope we will be able to have a season and compete for our fourth state championship.”

The NIAA has outlined a plan to allow each sport to have a six-week window for competition. Currently, it’s not expected that state tournaments will be conducted, but the NIAA is allowing playoffs to be played this season at the discretion of individual classifications, regions and leagues during each individual sports six-week time frame.

Even though state tournament hopes remain in doubt, the future promise of a season remains. A final decision will be made Jan. 1, 2020.

“While we’re certainly disappointed that at least for right now there is no plan to have a state tournament, we really are happy that there is a plan in place to have a season this year,” girls volleyball head coach Kurt Bailey said. “These girls are dying to get back out on the court right now and I’m glad it looks like they’ll be able to. It would really be disappointing to see their season canceled like spring sports were. My only hope is that as we continue to get further in the year, we can try to figure out some way to have a state tournament, even if changes need to be made. I’m hopeful that if we’re back in school in January and the pandemic restrictions have lightened, that we can find a way to get this done. It would really be disappointing if these girls didn’t get the opportunity to fulfill their goals.”

“I’m excited that there’s a plan in place for us to play this year,” boys basketball coach John Balistere said. “I’m hopeful we’re actually able to implement this plan when the time comes. Right now we’re in uncharted waters and the hardest part is being patient. Obviously we feel for these kids. I’m excited that there’s a plan and these boys will at least be able to play a condensed season.”

“I‘m happy that the fall sports season wasn’t totally canceled,” boys tennis and volleyball coach Rachelle Huxford said. “I know our students are disappointed and frustrated, but relieved, too. … As a coach, allowing the kids to have some normalcy in this chaos is necessary and important. The sacrifice is worth it.”