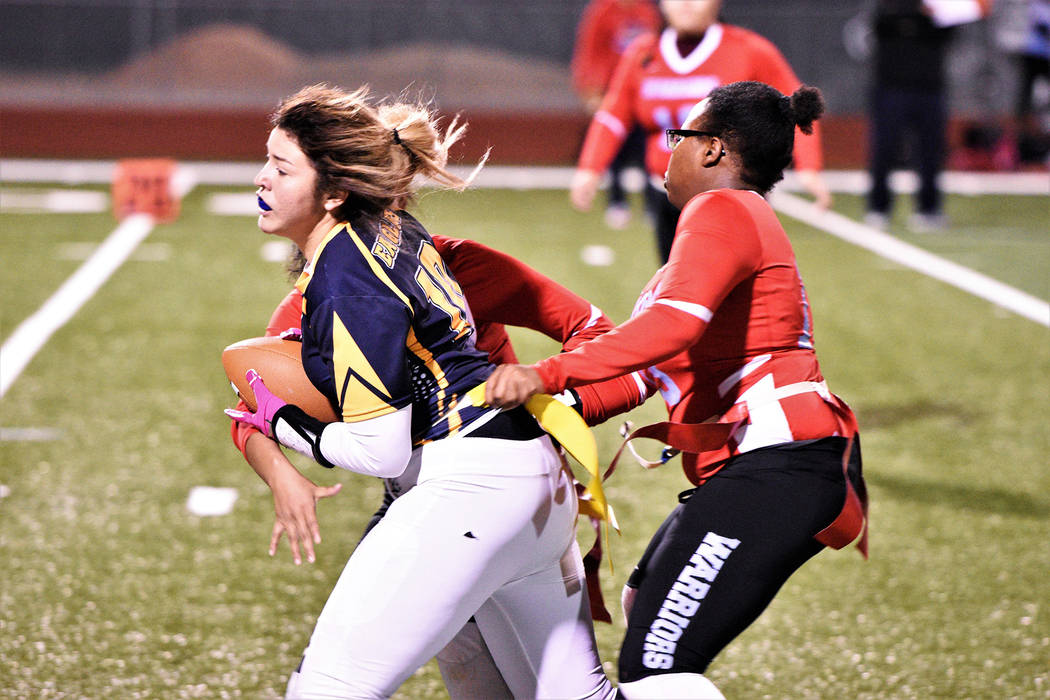 (Robert Vendettoli/Boulder City Review) Boulder City High School senior receiver Erin Taggard, seen fighting for yardage against Western on Dec. 3, caught three passes for 17 yards, including one for a touchdown, during the Lady Eagles’ 14-12 victory over Sunrise Mountain on Dec. 11.

The Boulder City High School flag football team ground out a 14-12 victory against Sunrise Mountain on Dec. 11, keeping their season with a perfect 4-0 record.

The statistics weren’t pretty for the Lady Eagles, who scratched and clawed their way to victory, but head coach Kevin Ruth said he couldn’t be prouder of his team’s effort.

“It was a super physical game,” Ruth said. “This was the first game we’ve had like that all year, and the girls didn’t back down. They came up with a big win over Sunrise Mountain.”

Doing enough offensively to get the job done, the Lady Eagles’ defense once again set the tone for the winning effort.

“The defense, in my opinion, has been the big difference this year so far,” Ruth said. “Sunrise Mountain beat us last year at the end of the season, and they have a very freaky fast running back that killed us. We were able to contain her a little better this year.”

Grinding out a win, Perkins said she was happy with the outcome but realizes her team needs to play more consistently if it wants to reach its full potential.

“We were strong to start, and then the other team was really aggressive,” Perkins said. “We started to lose our edge toward the middle of the game, but got our heads back together and finished strong. As coach always says, ‘A win is a win.’ I would definitely feel better if we just stayed strong throughout so we wouldn’t be put in those situations.”

Off for the next two weeks, the Lady Eagles will have ample amount of practice time to right the ship heading into league play. They will resume play Jan. 7 against rival Moapa Valley.