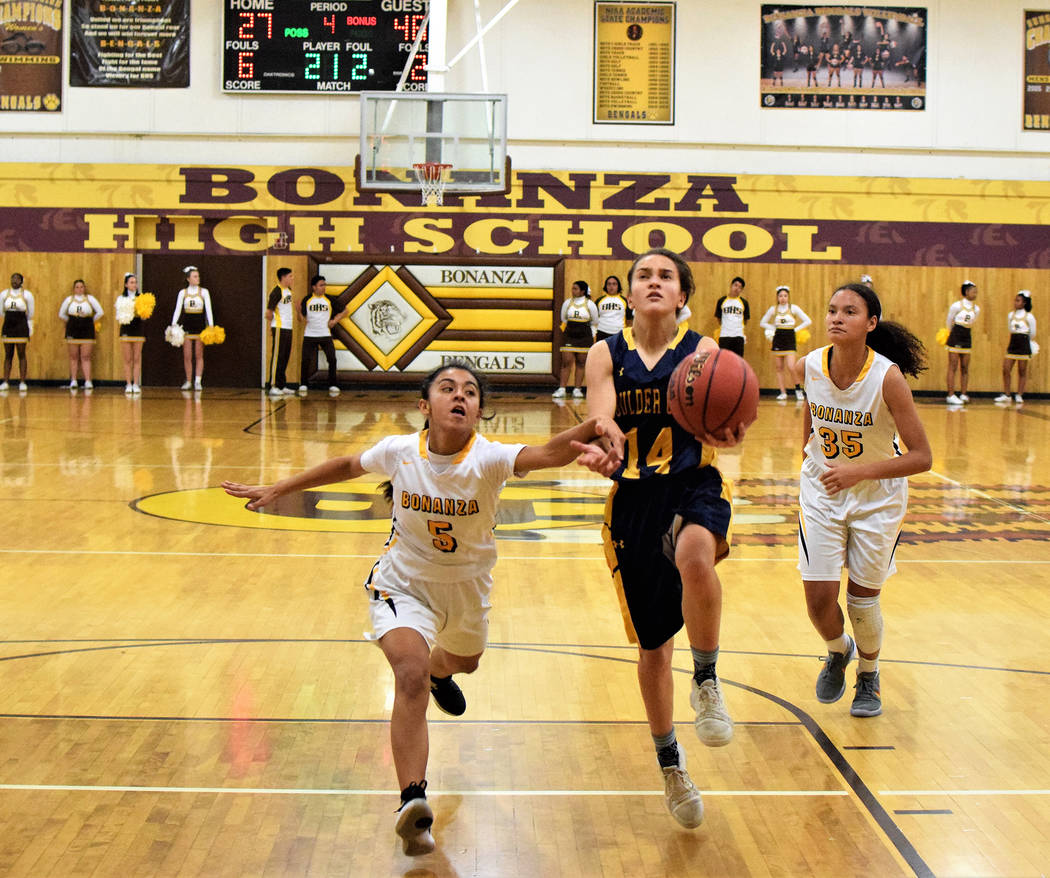 Boulder City High School girls basketball team competed in the Gator Winter Classic at Green Valley High School on Jan. 2-5, finishing with a 2-3 record and gaining valuable experience against a variety of teams.

Playing two of the tops team in the tournament, the Lady Eagles (7-7) fell to 4A Foothill 55-29 and Dimond (Alaska) 60-31, before rebounding to conclude the tournament with wins against Sunrise Mountain 46-41 and 4A Silverado 34-31. The Lady Eagles fell in their tournament finale to Antioch (California) 48-43.

“We faced some much larger schools, but overall I like the track that we’re on,” head coach Kirk Estes said. “We’re improving, we’re having kids play above and beyond where they were earlier in the season, so it’s encouraging.”

The Lady Eagles feature one of the 3A classification’s top starting fives, with each player capable of leading the offensive charge.

“We’re very well-rounded as a team,” Estes said. “Game to game we don’t know who’s going to lead us in scoring and the nice thing is this is an unselfish group and they don’t care who’s going to be the leading scorer. They always say it’s amazing what you can accomplish when no one cares who gets the credit and these girls live by that.”

Riding their strong guard play, Alexander and junior guard Madison Manns were key catalysts in the Lady Eagles’ success. Named All-League selections last season, the duo are on their way to repeating the honor.

“There’s games when Madison will have two points and obviously be the most valuable player on the floor because she’s such an unselfish player,” Kirk Estes said. “The same goes for Keely. They’re both all-conference players and they’re both gonna be leading guards in our league again this year. Just because of their style of play and their unselfishness, a lot of times it’s not going to be reflected in stats, But, for anyone who watches the game you’ll know that however they go, we go.

Concluding their preseason schedule with a matchup on the road Friday at Pahrump Valley, the Lady Eagles will start league play Tuesday at Virgin Valley. Battle tested early this season, coach Estes is confident in his group heading into the second half of the season.

“We played a very tough preseason schedule and our record reflects that,” he said. “If you were on the outside looking in, you’d say we’re in for a rough year but the fact is we played a bunch of good 4A teams. I think we’re really going to be in a good position in this league.”