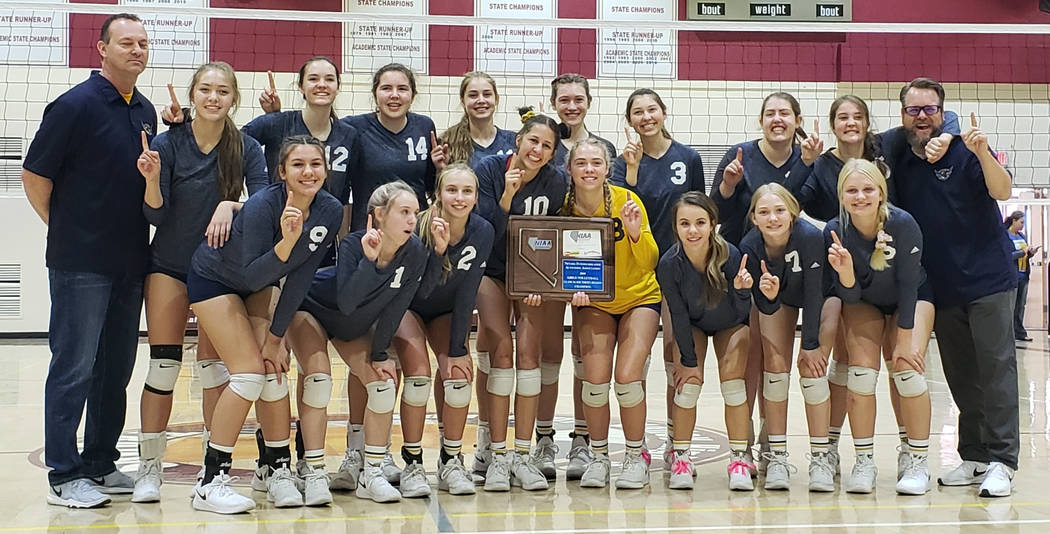 “Obviously, it’s a relief because the expectations were always there for this group,” said head coach Kurt Bailey. “Making it there last year, the girls arrived and thrived to make it there again this year.”

Cruising throughout the regional tournament, Boulder City also swept Valley and Pahrump Valley, making a statement to all oncoming challengers.

“The girls were really focused,” Bailey said. “They wanted to show themselves and everyone else just how good they can be when we play together. Being finally healthy is really making a difference for us. They came out ready to play and did a great job.”

Taking it to the Pirates early, sophomore Kamry Bailey had a career day for the Lady Eagles with a game-high 20 kills.

“In a way, being the underdog last year was easier than being expected to win this year,” Kamry Bailey said. “There’s a lot more pressure on us to win as defending state champions, but after how strongly we played against Moapa in the regional championship, we proved that we can handle that pressure.”

Kurt Bailey said he feels his team is up for the challenge of the state tournament after sweeping their way through the playoffs and league play. Starting with South Tahoe on Friday at Bishop Manogue High School, the Lady Eagles will try to win back-to-back titles for the first time in the program’s history.

“The girls are coming in with a lot of confidence,” the coach said. “We’ve played a really tough schedule, and they’ve found new ways to win. They’re willing to take on all challengers. Nothing seems to faze this team. They know that when we’re playing like a team, we’re a very tough team to beat. It’s very exciting to watch.”