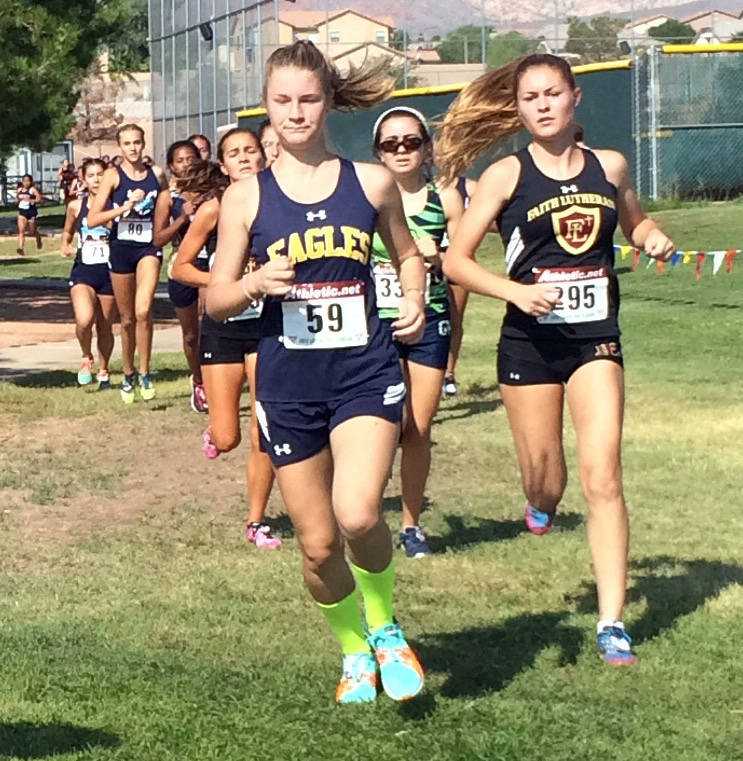 File Boulder City High School senior Sierra Selinger, seen during a September competition, placed third during regional competition, with a time of 21:52, helping the girls secure a berth in the state finals.

Boulder City High School’s girls cross-country team is heading back to state after finishing fourth at regionals on Friday, Oct. 27.

Finishing with an overall team score of 93, the Lady Eagles barely missed out on a top three finish at Veterans’ Memorial Park, falling behind a 92-point effort from rival Pahrump Valley.

“We came up a bit short at regionals of our expectations for various reasons,” head coach Staci Selinger said. “No excuses, we still qualified for the last state qualifying berth. We’re expecting better racing this weekend at state.”

While the team fell just short of its top three aspiration, senior Sierra Selinger didn’t, finishing Friday’s race with an overall time of 21:52 for third place.

“It’s definitely not the time we wanted for Sierra, and I noticed overall for everyone across the board that times were slower than you’d expect to see at regionals,” Staci Selinger said. “Veterans is definitely not an easy course. Sierra still ran a great race, but we want to see faster times going into state and the postseason championship races.”

Despite posting slower-than-expected times, the core duo of senior Camille Torgesen and sophomore Audrey Selinger contributed heavily, finishing 14th and 16th, respectively, with times of 23:40 and 23:43.

“Camille and Audrey were a huge factor in the team’s success, despite that both struggled a bit on Friday. Despite that, they gave it their best and came through for us and are a key factor in our ability to make state as a team.”

Also factoring heavily in the Lady Eagles’ push toward state, freshman Sophie Dickerman finished 23rd with a time of 24:47.

“Both of them ran well and made a lot of progress over the season,” Staci Selinger said. “I’m looking forward to them continuing to improve their times and being contenders at state next year.”

Saturday’s 3A state meet will be held at Shadow Mountain Park in Sparks.