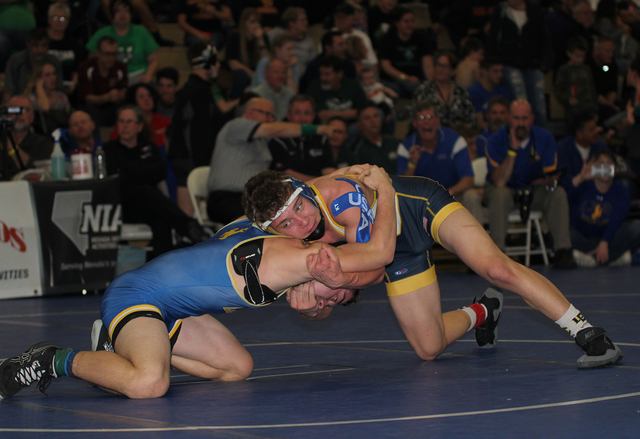 The top Southern Nevada team to place in the state wrestling championships, Boulder City High School walked away with third place, with a score of 123.5, falling behind northern powerhouses Spring Creek (135) and Churchill County (132.5) during Saturday’s competition in Sparks.

Ten Eagles made it to the championship round, finishing with a pair of second-place finishers along with four third- and four fourth-place finishers.

“Obviously, we would have liked to win a championship, but a third-place finish isn’t bad,” said senior 145-pound wrestler Octavian Trumbo, who finished in fifth place. “To finish as the top Southern Nevada team is no small accomplishment. We know we gave it our all.”

“I have to give it to him; he wrestled a great match,” Reese said. “Those guys from the north are the real deal. The competition is definitely tougher up there. Thankfully, he’s a senior, and I won’t have to see him again next season. I appreciate our battle, though; he definitely made me more hungry for my senior year.”

“For Jimmy to come out here for the last time, given everything he’s been through, is very special,” Cox said. “His grandfather (Chuck Brown, who died Jan. 20) would be very proud of him.”