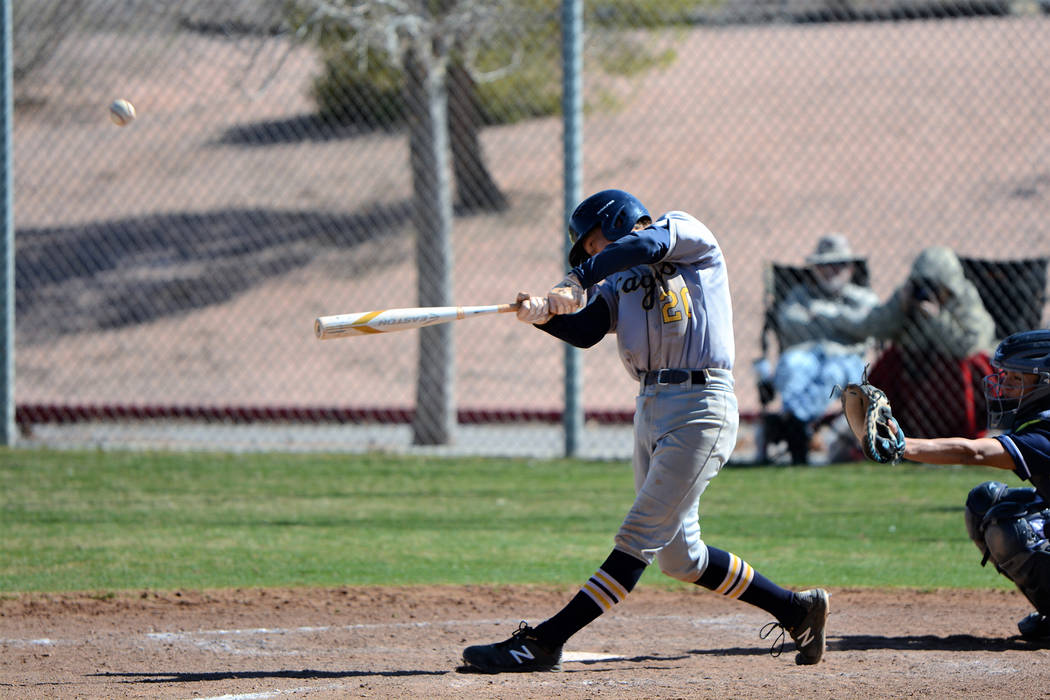 (Robert Vendettoli/Boulder City Review) Boulder City High School sophomore Scott Badhe hits a double to left center field in the sixth inning against 4A Foothill on Saturday, March 9, driving in a pair of runs during the Eagles' 16-8 victory.

Competing in the highly competitive 4A Bengal Kick Off Tournament, Boulder City High School baseball is sitting with a winning 3-2 record after the first week of play.

“I’m pleasantly surprised with how we played this week,” head coach Ed McCann said. “I thought we had a chance to be a good team; they’re young, but they don’t play young. The team chemistry is off the chain; they love each other. It’s been a lot of fun to be around.”

Falling 6-1 in their season opener March 7 to 4A Spring Valley, the Eagles rebounded Friday, March 8, with a 13-3 victory over 4A Durango. Concluding the Kick Off Tournament with a double-header at 4A Foothill on Saturday, March 9, the Falcons took the first game 4-1, before the Eagles stormed back for a 16-8 victory in game two, highlighted by an eight-run eighth inning.

On the verge of leaving their opening preseason tournament with a losing record, McCann said he is proud of his group for buckling down in their final outing and coming away with the victory.

“The boys know the path that’s in front of them,” he said. “They know the tradition that our program has and the legacy that they have the chance to leave. They come to work every day, they have their lunch bucket packed and they’re ready to work. They don’t complain, they don’t get down on themselves, they just find a way to get the job done.”

Junior Jonathan Neal picked up the win after an inning of relief.

Against Durango, Thorpe picked up the victory after throwing three innings of relief, striking out nine batters, while allowing one run. At the plate Thorpe finished one-for-four with a two-run double.

The Eagles followed the tournament with a crucial road win against rival Pahrump Valley on Monday, March 11, rolling to a hard-fought 6-3 victory against a presumed playoff opponent.

“I told the boys to enjoy this one because it’s a nice win, but tomorrow we go back to work,” McCann said. “I always tell them the season is a marathon, not a sprint, but it’s also fun to sprint out of the gates as a marathon runner and I think that’s what we’re capable of. It’s a long season and there will be a grind; we have our work cut out for us. Thankfully, these boys have a work ethic that’s second to none.”

Jumping out to a 3-1 lead early, the game was never in doubt for the Eagles, which got four solid innings from sophomore starter Joey Giunta, who was awarded the victory after allowing one run with five strikeouts.

At the plate, Giunta batted two-for-four with an RBI, while Trumble (one-for-four), junior Clark Newby (one-for-two) and sophomore Troy Connell (one-for-three) each drove in a run.

Looking to play the best competition early on, the Eagles will travel to Utah this weekend for the Southern Utah Spring Kick Off Tournament. Starting playing Friday, March 15, the Eagles will play Utah opponents Hunter and Highland, followed by Idaho opponent Thunder Ridge on Saturday, March 16.

The Eagles will round out the week with a home game against Del Sol on Monday, March 18, followed by road outings on Tuesday, March 19, and Wednesday, March 20, against Mojave and Valley, respectively.