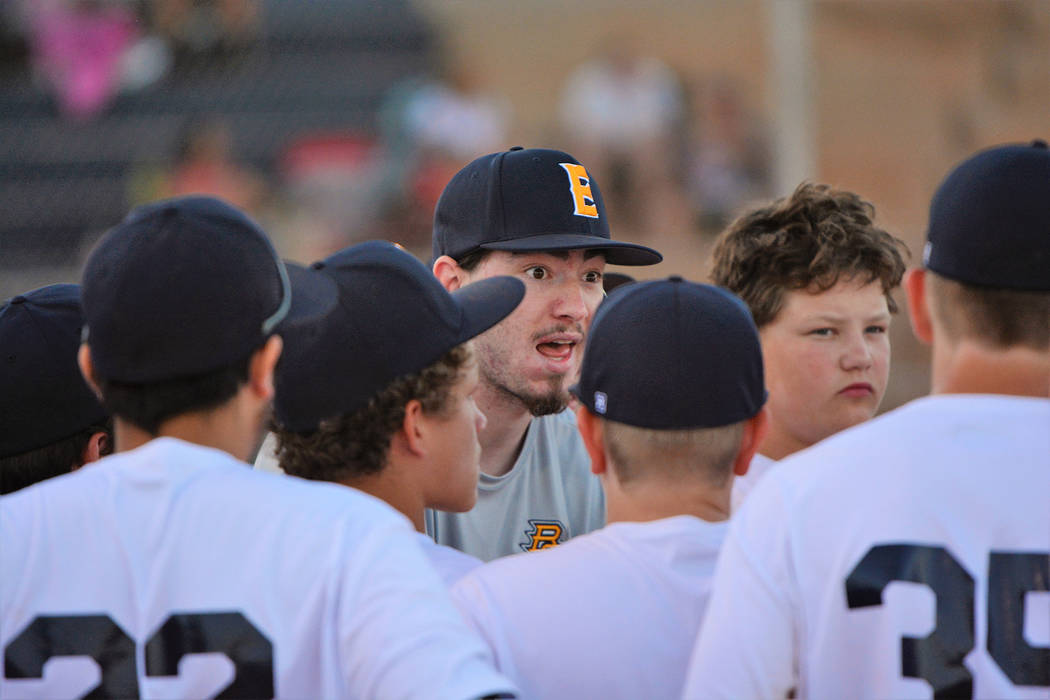 (Robert Vendettoli/Boulder City Review) Steve Wagner, a 2016 graduate of Boulder City High School, is seen addressing the Southern Nevada Eagles 14U baseball team June 22, 2019, after a six-run third inning. He and two alumni of the high school team are coaching younger players as a way to give back and honor the program that helped them hone their skills.

Coming back to pay homage to the Boulder City High School baseball program, alums Alec Mathis, Anthony Pacifico and Steve Wagner have been churning out the next crop of future Eagles stars, helping coach the Southern Nevada Eagles 14U team in the Southern Nevada Connie Mack league.

Spending their summer vacation giving back to the program that helped turner them into collegiate ball players, Wagner and Mathis are class of 2016 graduates who currently play for Kutztown University in Kutztown, Pennsylvania; Pacifico is a class of 2018 graduate who plays for Fresno City Community College in Fresno, California.

“It’s been an absolute pleasure to have them coach our 14U team this summer,” BCHS athletic director and baseball coach Alex Moore said. “They really made a great addition to our team and we’re happy to have them back.”

Happy to come back to their old stomping grounds, the trio has been joyous this summer giving back to the program that has given so much to them.

“There is just something so special about stepping onto Whelan Field and wearing Boulder City or Eagles across your chest,” Wagner said. “It makes you feel like you’re on top of the world; words don’t do it justice. I love being around this great group of guys as players back in the day and now as coaches. We have the best time with our kids and we have a blast.”

Looking to serve as role model for their pupils, the trio’s impact as coaches goes far beyond executing strategies on the baseball diamond, often offering advice about the game and life to those who seek it.

“I came back to give back to the program which did so much for me growing up,” Wagner said. I wanted to be a role model for these 14 and 15 year olds because experience is the best way to learn. I don’t have a passion for coaching; I have a passion for teaching. I trying to teach these kids how to be better people, on and off the field. I love having the ability to help out the younger generation so they don’t make the same mistakes I did.”

While Wagner is looking to help the younger generation of Eagles blossom, the opportunity has allowed Mathis to pursue something he’s passionate about as well as offer experience for a potential coaching career down the road after his playing days.

“To be honest, I just love everything about the game of baseball,” Mathis said. “I love being out here and I couldn’t imagine doing anything other than baseball. Coaching is definitely something I’d have to consider down the line after I’m finished with my playing career. It’s something that I’d love to do in the future.”

Wagner said he feels the team members have responded well to their new coaches this summer. Offering them a different perspective than a traditional coach, player develop has been a key component of playing in the Nevada Connie Mack League.

“Our team has had its ups and downs but for the majority of the season it’s been a success because each player on our team is better today than they were on day one,” Wagner said. “I preached to my guys, which is “one day at a time, getting better each day. They have responded really well to us as coaches, they understand that we are young and are still players today, so they understand that we have a lot to offer.”

Wrapping up their season Saturday, July 13, at Foothill, the Eagles (11-6) have ensured themselves a winning season, while the volunteer coaches gained a winning experience.

“The best part about coaching this team was they had a great deal of respect for us,” Wagner said. “After each practice or game they come up to us individually, without us coaches having to ask, and (shook) our hands and said ‘Thank you, coach.’ That’s something we never told them to do. That’s what separates our kids from the rest and that’s something we take a lot of pride in. That’s Boulder City baseball.”