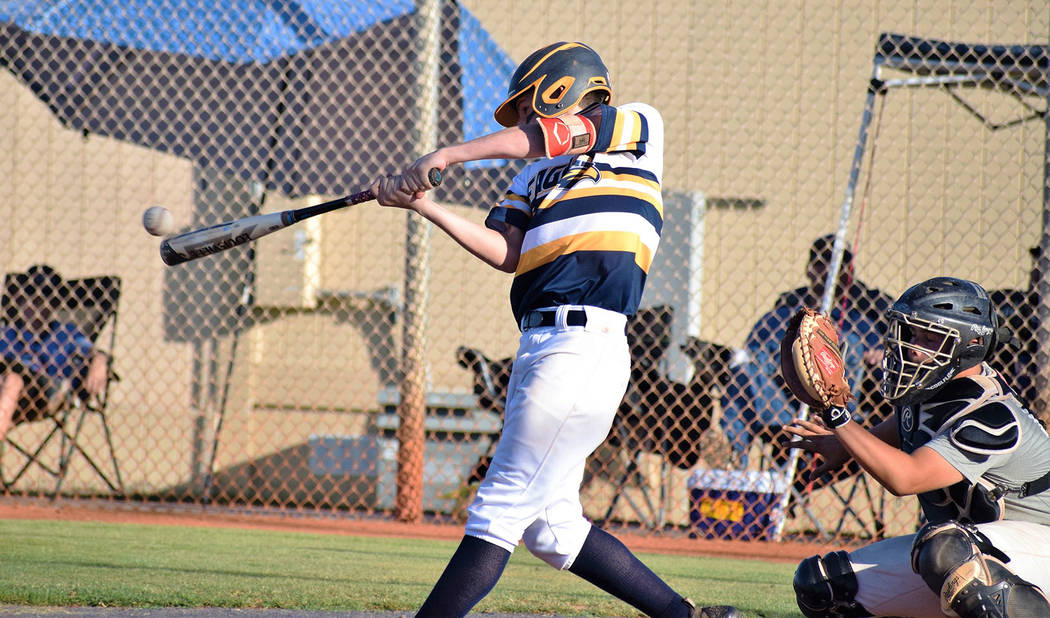 Robert Vendettoli/Boulder City Review Ian Mills, playing for the Southern Nevada Eagles 16U team in the Connie Mack summer league, hits a single up the middle against Shadow Ridge on June 19. This week for the Eagles Mills batted in two runs.

Remaining undefeated, the Southern Nevada Eagles 16U won games against Western and Foothill affiliate Southern Nevada Falcons in a pair of shutouts in the Connie Mack summer baseball league.

“I thought our team played great the last two games,” head coach Steve Connell said. “The final scores on these games look like blowouts, but it is close sometimes to the fourth inning. We have a great set of athletes, and that show up as the game wears on.”

Cruising past Western’s 18U program, Deavin Lopez hit a two-run home run in the top of the seventh inning to drive the Eagles past the Warriors 11-0 on Friday, June 22. It was the Eagles’ first home run of the season.

Earning his first win, Matt Felsenfeld pitched a complete game for the Eagles while striking out five batters. Felsenfeld finished 1-for-3 at the plate with three runs batted in.

Felsenfeld became the seventh Eagle to record a win this season, showing off the team’s depth.

Defeating the Falcons 14-0 on Saturday, June 23, the Eagles exploded for five runs each in the third and fourth innings to mercy rule their opponent in four innings.

Finishing 2-for-3, Troy Connell tallied three RBIs, while Newby (2-for-3) and Felsenfeld (1-for-3, one double) each finished with two RBIs.

On the mound, Newby recorded the win after throwing three scoreless innings where he allowed three hits with six strikeouts. Newby now leads the team with four wins on the season.

“I think what makes us a good team is that we have played so much together,” Troy Connell said. “This group has probably played over 100 games together in the last two years. Once someone gets that first good hit it seems to cause many more to follow.”

Playing a doubleheader Saturday, June 30, the Eagles will host Faith Lutheran at Whalen Field. Game one will start at 5 p.m. and game two will start at 7 p.m.