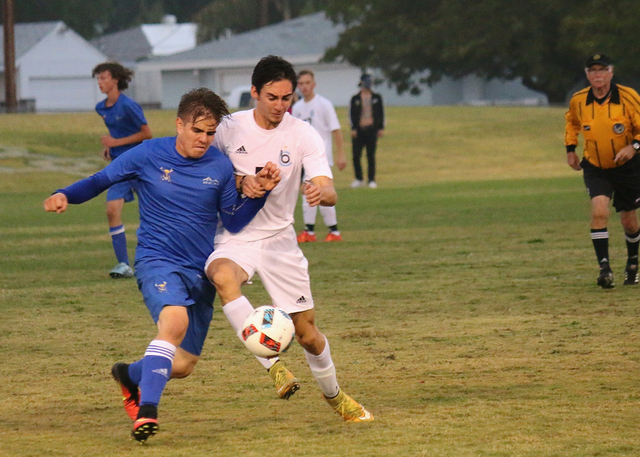 Laura Hubel/Boulder City Review Boulder City High School senior Hunter Dale was a strong force on the field with the Eagles, managing to hold the Moapa Valley Pirates allowing no shots to score during the boys soccer team's 2-0 victory Monday.

The Eagles obtained the win they needed to advance to the postseason, but a win by Virgin Valley High School effectively put Boulder City on the outside looking in.

“The boys performed great last night and their efforts in the past couple of weeks have paid off,” head coach Chad Smith said. “I’m very proud of them.”

Senior midfielder Sebastian Balmer and junior midfielder Alex Krausman ignited the Eagles’ scoring charge with a goal each in the second half of the team’s decisive victory.

Balmer, a four-year varsity letter winner, has been the Eagles’ main table setter this season with a team-high seven goals following three years in which he was scoreless. Krausman lifted his season goal total to three.

The Eagles will wrap up their season against Adelson High School.Having already hosted the 11-0-1 2A Lions once, the Eagles will be seeking revenge for their early-season 2-1 loss.

Concluding their regular season today at Moapa Valley, a win would seal the Lady Eagles’ first postseason trip since 2012. The game originally was scheduled Monday, but was postponed because of rain.

Racing past Del Sol easily, the Lady Eagles routed the Dragons 25-10, 25-9, 25-14 on the road, sparked by the stellar play of captains senior Alea Lehr and junior Maggie Roe, and sophomore Ashleigh Wood.

Having a tougher time against the league champion Pirates after nearly escaping with a victory in their home matchup earlier in the season, the Lady Eagles were no match for Moapa Valley following their bus ride to Overton, losing to the undefeated conference program 17-25, 9-25, 11-25.

Having locked up the No. 2 seed in the 3A Sunrise, the Lady Eagles travel to host Pahrump Valley on Monday where they’ll play Sunset No. 3 seed Cheyenne. If the Lady Eagles beat the Desert Shield, they’ll gain a second-round home match Wednesday, with the regional semifinals and finals being played at Boulder City High School.

“I’ll be happy if we make it to the second round and are able to play in the playoff game we are hosting,” head coach Cherise Hinman said. “It’s going to take leadership on the court during game one to get us there though.”