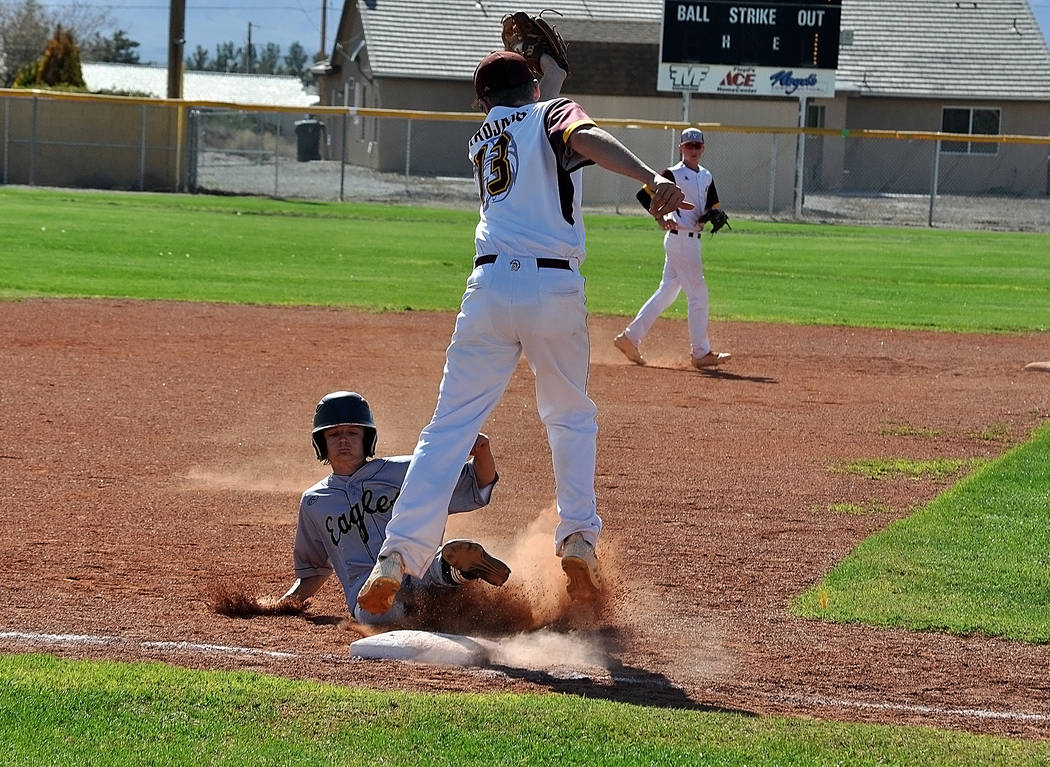 Horace Langford Jr./Pahrump Valley Times Boulder City High School freshman Troy Connell slides into third during the Eagles' game against Pahrump Valley on Tuesday. He batted in two run in the game that ended with an 11-11 tie.

Playing until the bottom of the eighth inning, the game was called because there are no field lights on Pahrump Valley’s field, leaving the Eagles with a case of what ifs for their bus ride home.

“Obviously a tie is better than a loss, but we really wanted to beat these guys,” head coach Ed McCann said. “The way we were playing early on, we should of run ruled these guys. Our bats are getting hot at the right time. We looked really solid.”

Cruising 10-1 heading into the bottom of the fifth inning, the Eagles were on their way to a mercy rule victory behind three runs batted in from senior Rhett Armstrong (3-for-6) and two RBIs from freshman Troy Connell (1-for-2).

Closing out the sixth inning 11-4, junior Shaun Jones brought junior Travis Hungerford home on a triple to right field in the top of the sixth inning before the momentum shifted in favor of the Trojans in the seventh inning.

“We had the game won heading down the final stretch and we practically handed it to them,” McCann said. “Today, our pitchers just weren’t on their stuff. This is baseball, it happens.”

Closing out the eighth inning, Freshman Joey Giunta struck out the final two Trojan batters to stop the bleeding for the Eagles, before the game was called. In all, Giunta pitched 1 2/3 innings to finish with three strikeouts and two hits.

“I was very impressed with the way Joey pitched today,” McCann said. “He came in, in a tough spot and ended the seventh for us and then put them away in the eighth. I have a good feeling about this kid.”