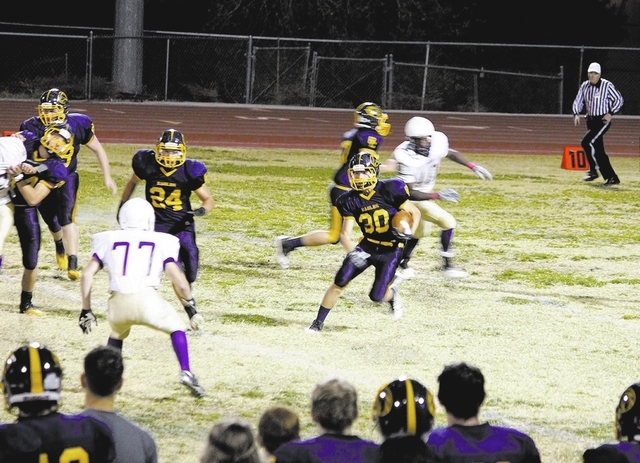 The Boulder City football team’s up-and-down season ended Friday with a 62-7 road loss against Faith Lutheran in the Division 1-A region playoffs’ opening round.

Boulder City, the No. 4 seed from the Sunrise League, ends its sixth season under head coach Alex Kazel with a 4-6 record. The Eagles, with only six seniors and a varsity roster of 25 players, reached the playoffs for a second consecutive year.

Faith Lutheran, 9-2 and the top seed from the Sunset League, advances to the region semifinal where it will play at home Friday night against Desert Pines, 9-1 and the No. 2 seed from the Sunrise League.

The Eagles will have to wait till next year.

“Our season was an up-and-down season. It had its good parts and bad parts but I think it was a fairly good season,” junior wing back Brooks Roe said. “This prepares us not only for next season, but for the offseason. It means we need to hit the weight room hard and continue training to be even better next season.”

The game marked the second consecutive year that the Eagles reached the regional playoffs and met the Crusaders in the opening round. It also was Boulder City’s fourth meeting with Faith Lutheran in its past 20 games over two seasons.

Faith Lutheran’s Mark Rubalcaba blocked a punt on the Eagles’ opening possession and Dylan DeFrank scooped it up and scored on a 10-yard return.

In the teams’ the first meeting of the season, Sept. 20, Boulder City stayed close and could have pulled out the game before losing 31-19. This game wasn’t close.

Faith Lutheran quarterback Jake Deaville connected on each of his first 10 passes, including touchdown tosses of 63 yards to Vinny DeGeorge and 6 yards to Rubalcaba.

Keenan Smith rushed for a 1-yard touchdown midway through the second quarter to extend the Crusaders’ lead to 28-0. Smith scored four touchdowns.

“This was definitely a roller coaster season for us,” Carmell said “We had ups and downs but in the end we made the playoffs and that was our goal. But it was a shame that it ended the way it did, especially for our seniors. But everyone coming back next season got lots of experience and that will make us better next year.”

Earlier this season, the Eagles battled the Crusaders in a close road contest before losing. The Eagles beat the Crusaders twice in 2012 — once at home, 41-22, in the season’s second game, and then 57-33 to open the regional playoffs at home.

The teams reversed roles from a year ago, when the Eagles were the top seed, Faith Lutheran was the fourth seed, and the Eagles won both at home.

The Eagles clinched the fourth place and the final league playoff spot with 14-8 road victory on Oct. 24 at Chaparral. The Eagles needed a victory heading into the final week of the regular season in the winner-take-all match-up with Chaparral.