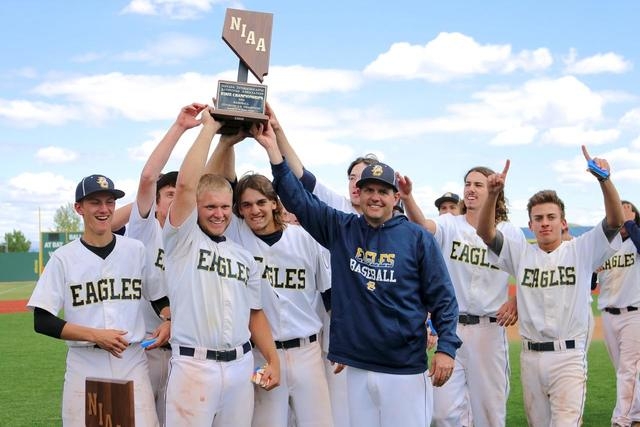 Taking home player of the year honors not only for the Sunrise league, but for the entire Southern region of the Division I-A, senior Peyton Koopman was awarded as the state’s best following a senior campaign in which he was both clutch at the plate and lights out on the mound.

Throwing a perfect game for the Eagles and smashing home the state championship game-winning home-run, Koopman finished his senior campaign with a 8-2 record on the mound, with a 3.02 earned run average and 56 strikeouts, while batting .504 with 41 runs batted in, 11 doubles and three triples and home-runs apiece.

A two-way star for the Eagles, Wagner led the team with an 8-1 record on the mound with a 1.62 ERA and 41 strikeouts, while batting .241 with 12 RBIs and three doubles. Desantis, would be a key contributor at the plate for the Eagles, batting .350 with 22 RBIs, nine doubles, five home-runs and three triples, while Mathis batted .333 with 13 RBIs and five doubles.

Earning first-team All-Sunrise honors for the Eagles, were seniors Mike Morelli (.333 with 15 RBIs and six doubles) and junior Kodey Rahr (.420 with 30 RBIs and 10 doubles), while junior Preston VanDiest (.415 with 11 RBIs and two doubles), junior Jacob Hubel (.281 with 17 RBIs and four doubles) and senior Zach Murphy (.270 with 20 RBIs and three doubles) all made the second-team during league nominations

For the six-time defending state champion boys swim team, senior Navy commit Nick Lara led an impressive group of first-team All_Southern Region nominations, following a state meet performance in which he placed first in the 100-yard butterfly with a time of 51.99.

Joining the senior, was the freshman duo of Paco Cuevas and A.J. Pouch, who each shined individually at state, winning the 200-yard individual medley and 100-yard breaststroke separately, while junior Braden Klouse,sophomore Clayton Pendleton and senior Joren Selinger all appeared on the first-team as well.

Leading the way for the Lady Eagles at state, Lloyd completed the sweep in the 200-yard individual medley and in the 100-yard backstroke with times of 2:05.30 and 56.31 seconds respectively, which set new Division I-A state records.

Also placing first for Boulder City at state, were juniors Mandy Gebhart and Abby Sauerbrei, to give the Lady Eagles four individual champions overall. In the 100-yard butterfly, Sauerbrei placed first with a time of 59.50 seconds, while Gebhart placed first in the 500-freestyle with a time of 5:01.62 to set a new Division I-A state record as well.