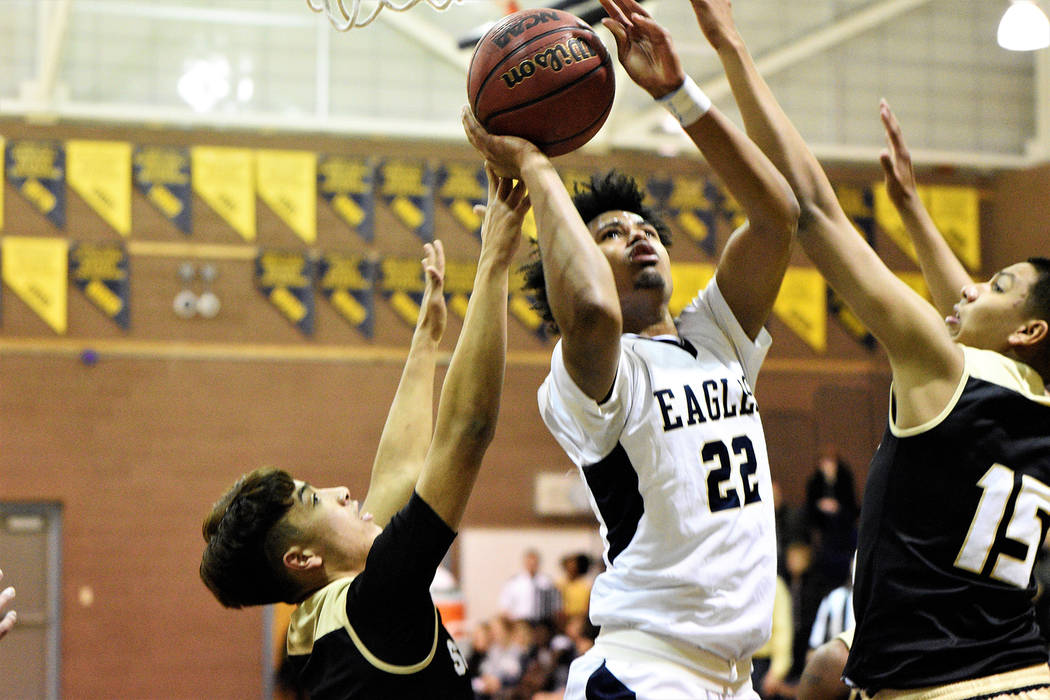 In the 63-61 win against Chaparral, senior forward Derrick Thomas scored on a layup with 10 seconds remaining to give the Eagles their victory.

Keeping his composure in the final seconds of regulation, Thomas, who finished with 16 points and eight rebounds, was confident in the Eagles’ ability to close out the win.

“I knew coming down to the wire that the team and coach (John) Balistere would put us in a great position to win,” Thomas said. “We went out there and executed.”

Based on rigorous battles in the past five years, the Cowboys have become one of three rivals for the Eagles.

“Chaparral has been a thorn in our sides for the last couple years,” head coach John Balistere said. “We were finally able to get over the hump this season and beat them both times. This is probably the best win I’ve had with the program. We’ve come close in the past and now it’s a great feeling to say we’re league champions.”

Getting strong contributions from their starting core against the Cowboys, sophomore forward Ethan Speaker continues to blossom into a star after scoring a game-high 26 points with eight rebounds.

“Ethan creates a lot of matchup problems for opposing teams,” Balistere said. “On any night he can go off and lead us in scoring. He’s a nightmare to plan for.”

Continuing to cause problems in the paint, Speaker ran the floor relentlessly against Sunrise Mountain on Tuesday, Feb. 12, in the Eagles’ 72-40 victory, throwing down several vicious dunks, including an alley-oop in a 14-point effort.

Leading all scorers, Thomas added 26 points and 13 rebounds, despite sitting out the majority of the fourth quarter. Thomas found his groove early, scoring 11 points in the first quarter including three 3-pointers during a 17-2 run.

“Tonight was Derrick being Derrick,” Balistere said. “He’s a great player and he took advantage of getting some open looks. He was able to knock them down and got into a good rhythm early.”

Looking to conclude league play with a perfect 10-0 record, the Eagles will travel to rival Moapa Valley on Friday, Feb. 15.