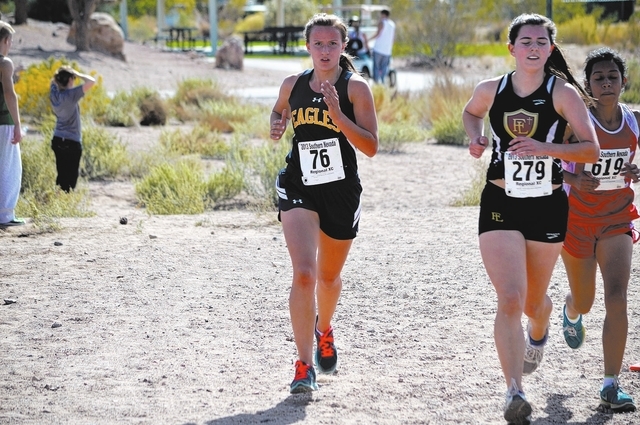 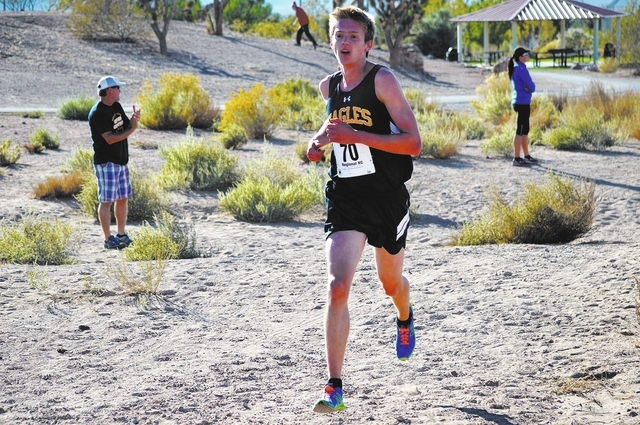 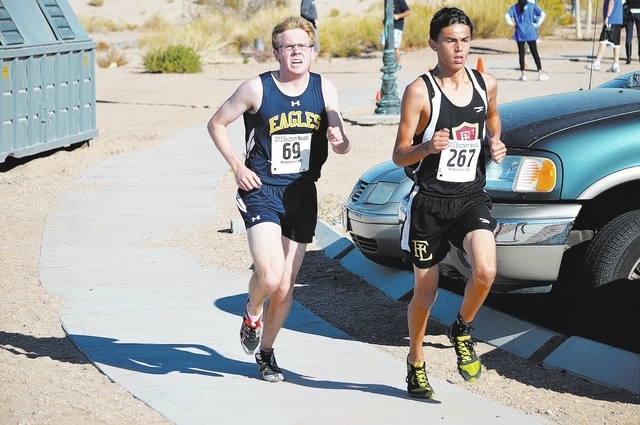 Boulder City cross-country coach Canaan Petersen was as excited as he has been in several seasons as he watched his boys team cross the finish line Saturday with a state-qualifying finish at the Division 1-A Southern Region championships at Veterans Memorial Park.

In all of the season’s major meets, the Eagles were always the Southern Region’s fourth-best team. Petersen urged the Eagles to keep working hard with the hope they could pull an upset and catch someone at the regional meet. Only the top three teams advance to the state championship meet.

The Eagles, led by Chandler Harkins and Evan Klouse, fulfilled their coach’s request. They surprised him and everyone else with a score of 69 points to place second behind champion Tech’s winning low score of 43. But more importantly the Eagles are headed to the state championship meet this Saturday at Reno’s Rancho San Rafael Regional Park in Washoe County.

“We did it, we did it,” an exuberant Petersen said. “What an effort. The boys’ team showed that morning with everyone expecting them to be fourth again based on the season’s projections, but they rose to the occasion.”

Jessica Embro ran 22:06.7 and finished fifth in the Southern Region girls’ championship race and is the only runner from the Lady Eagles team to qualify for the state meet.

There was some confusion on the morning of the region race as No. 2 seed Clark failed to arrive in time for the race. That opened the door for Boulder City to challenge Faith Lutheran and Virgin Valley for the two spots available behind No. 1 seed Tech.

Harkins and Klouse were expected to qualify for state as individuals, but Petersen credits three other runners with making it happen for the entire team.

“Three runners, Christian, Joren and Caleb ran a fantastic race,” Petersen said. “We run on this course three times a year and each of them cut off approximately one minute of time from the first race of the season on the course. Chandler and Evan led the team again, but it was the three other boys that allowed the team to move on to the state championships.

“The improvement in their time and placing is what allowed the team to get second place on Saturday. Even if Clark was in the race, I still think the team would have placed second. I am really proud of the boys’ efforts all year.”

The state meet will provide yet another challenge to the Eagles and others from the region.

Traditionally, Southern Nevada runners have struggled in alternate years when the championship race is run in Northern Nevada because of the much colder weather and unfamiliar terrain.

In the girls competition, the Lady Eagles scored 112 points and finished in fifth place, but did not advance the team to the state meet. Faith Lutheran won with a low of 65 points.

But the Lady Eagles received an excellent performance from Emma Torgesen, who was 13th with a time of 23:39.7.

“Jessica looked impressive on Saturday,” Petersen said. “She has steadily improved over the course of the season and it paid off in the region race. Her running capacity and running form have improved and allowed her to earn a medal in the region race. She narrowly missed fourth place.”

Torgesen’s time improved all season and she will be the top returning underclassman for next season. Niquel Nussear, Maddie Sargeant and Aubrey Klouse also contributed to the team’s good fifth-place finish.