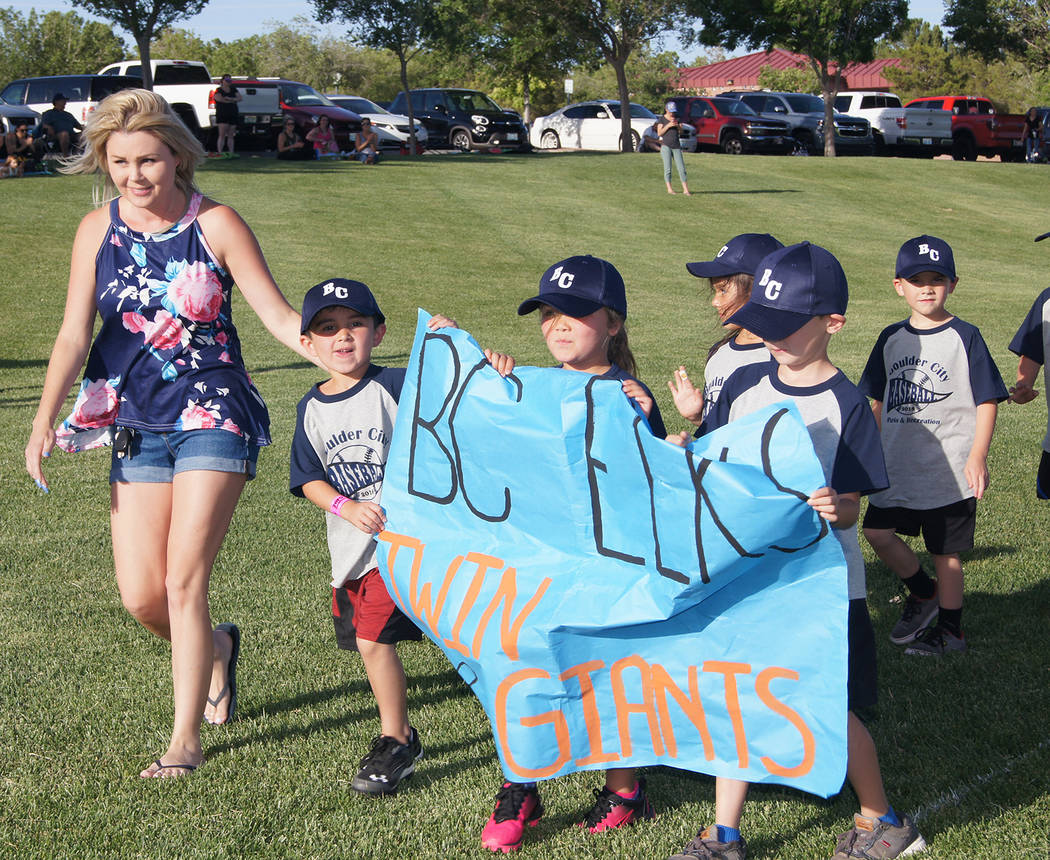 Kelly Lehr One of Boulder City Parks and Recreation Department's youth ball leagues thanks its sponsor during recent opening ceremonies for the summer session.

Boys’ baseball and girls’ softball is being played at Hemenway ball fields at 6 p.m. Mondays and Wednesday.

The youth sports program also has T-ball and coach pitch leagues that are being played at Veterans’ Memorial Park’s Pratte Field at 6 p.m. Tuesdays and Thursdays. The park is at 1650 Buchanan Blvd.

The leagues began last week after opening ceremonies kicked off the season and will continue through mid-June.

Youth soccer is the next Boulder City Parks and Recreation sport to sign up for. Registration is being taken throughout summer, with a skills clinic offered Aug. 18 at Pratte soccer fields in Veterans’ Memorial Park, 1650 Buchanan Blvd.

Games begin in late September. Soccer is offered for students in kindergarten through eighth grade.

The Parks and Recreation Department is looking for adult men’s basketball teams to participate in its second annual summer basketball league. Games will be played Tuesdays and Thursdays in June and July. Games are played at the Recreation Center, 900 Arizona St., in the evenings beginning at 7.

Boulder City Parks and Recreation Department’s coed softball league takes a break this weekend for the Memorial Day holiday but will resume games in June to finish up league play.

T.Q. Pallets is in first place with a 9-2 record, followed by Lakefront Pool and Contracting Services (8-4) and Boulder Dam Credit Union (7-5). Boulder Dam Brew Pub (6-6) is fighting for a top position with The Backstop (3-9) and Golden Tours (3-9) on its heels, according to Kelly Lehr, sports coordinator.