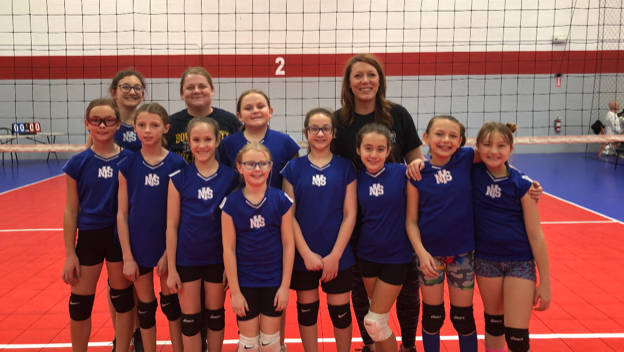 Last fall, the department ran skill clinics for one month to gauge the interest in a youth volleyball program. Twelve girls initially participated in the program; more have joined since then, according to Kelly Lehr, sports coordinator.

The department entered the group’s older girls into a Nevada Youth Sports league in Las Vegas. While all of the girls practice Friday evenings at the recreation center’s new gymnasium, Jami Goudy and Bridget Martorano are taking the girls with more advanced skills to a new level of play by competing against other teams in the greater Las Vegas area.

In the past two weeks, the girls have gone undefeated in weekend play. They face girls who are much older and some coed teams, yet they are winning, Lehr said.

They are learning the basic skills of the game, perfecting teamwork and gaining court experience. This will be instrumental in the future of Boulder City volleyball, as most of these girls will enter junior high school play next year, she added.

As the department prepares for the upcoming season, call Lehr at 702-293-9254 if you have an interested third- through fifth-grade girl.

The parks and recreation department’s men’s basketball league will begin tournament play tonight, Feb. 21, with Slow and Steady in first place and Wasted Talent and Flight S2S in a close second. The double-elimination tournament will be played Tuesdays and Thursdays in recreation center’s new gymnasium through March 5.

According to Lehr, this is the largest league the city has had in years and it is the most competitive.

”This will be an exciting tournament,” she said.

The department’s coed and men’s softball season is right around the corner. Teams interested in playing in the spring and summer season should contact Lehr at 702-293-9254.

A manager’s meeting for both softball leagues is scheduled for 7 p.m. March 21.