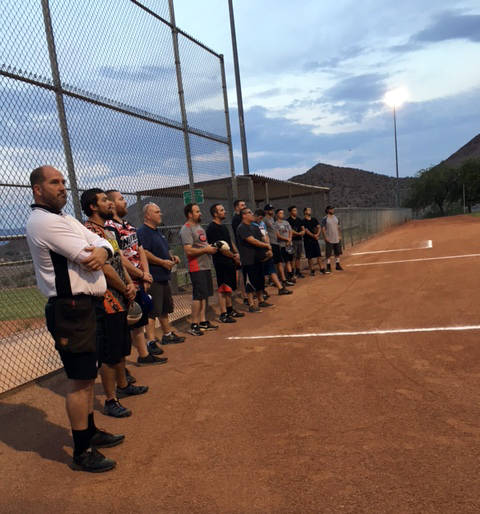 Kelly Lehr Marty Lalley, far left, head umpire for the Nevada Softball Association, spoke about the late Dan McMahon and his contributions to softball in Southern Nevada, prior to the start of the Boulder City Parks and Recreation Department's softball league opener on Sept. 7.

On Sept. 7, the men’s softball teams honored the late Dan McMahon, a legend within the community’s softball leagues, said Kelly Lehr, sports coordinator for the recreation department. There was a moment a silence prior to the first pitch, and Marty Lalley, head umpire for the Nevada Softball Association, spoke about McMahon’s contributions to Boulder City and softball in Southern Nevada.

Women’s volleyball began Monday night. Volleygirls, the reigning champion, is the team to beat, with hard-hitting Synergy close behind, according to Lehr. Games are played at 6:30, 7:20 and 8:10 p.m. in the new gymnasium at recreation center, 900 Arizona St.