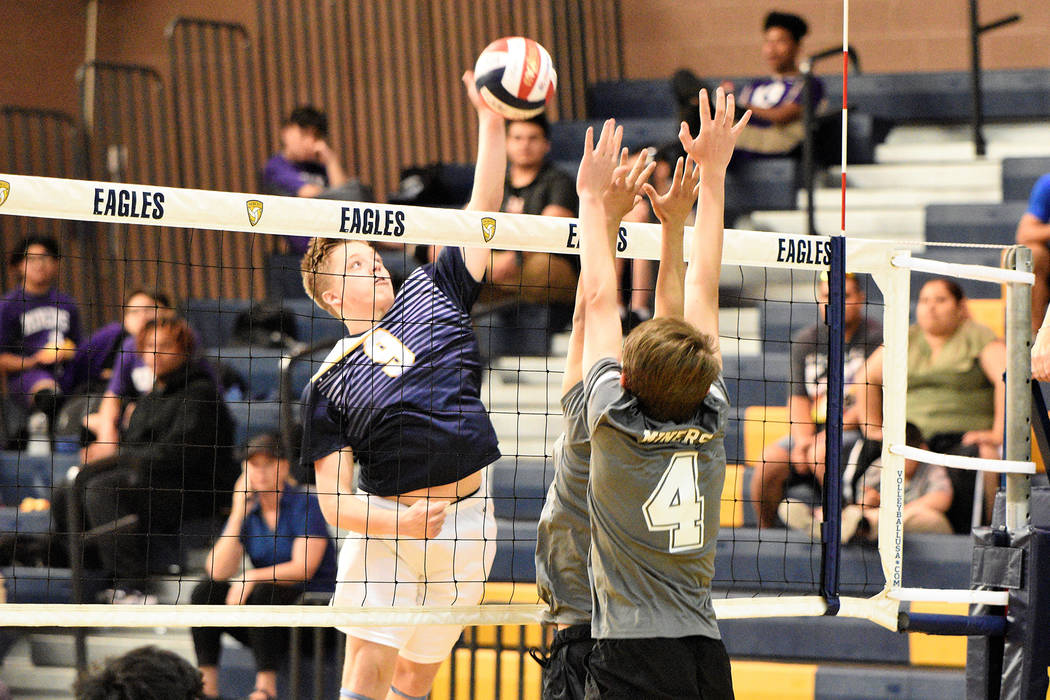 (Robert Vendettoli/Boulder City Review) Rising above the net, junior Dylan Leasure spikes the ball for a successful kill against Sunrise Mountain on Tuesday, April 23. He had a Dylan Leasure had a breakout game with seven kills in Boulder City High School's 25-18, 25-12, 27-25 victory.

Despite a little bit of rust to shake off after a long spring break, Boulder City High School’s boys volleyball team picked up where it left off, defeating Sunrise Mountain 3-0 on Tuesday, April 23.

“We were a little rusty coming back off of spring break and we definitely didn’t play our best,” senior Karson Bailey said. “However, we still ended up winning and we will look to get back to how we were playing before the break for the rest of the games this week.”

Coming out a bit sluggish but still effective, Bailey and junior Preston Jorgensen led the way offensively with 13 kills.

On defense, Bailey also blocked a game-high five shots. The Eagles totaled 10 blocks as a team.

“We have some good size on our team and players who know how to go up and get blocks,” head coach Rachelle Huxford said. “That’s extremely important in our league because we face a lot of good hitters and they’ll eat you alive if you don’t. Our team is versatile and makes it tough for our opponents. I know I wouldn’t want to hit against them.”

Adding another playmaker to the offense, junior Dylan Leasure had a breakout game with seven kills, giving the Eagles another option to rely on.

“It has been a slow progression for Dylan and I think he has finally figured out how to hit the ball,” Rachelle Huxford said. “He’s not a big, tall intimidating player, but he has so much power and when he hits that ball it’s unbelievable. He hits it harder or just as hard as Karson and Preston and his accuracy has improved.”

Heading into the home stretch, the Eagles will travel to Chaparral tonight, April 25, before hosting their senior night against 4A Legacy on Friday, April 26.