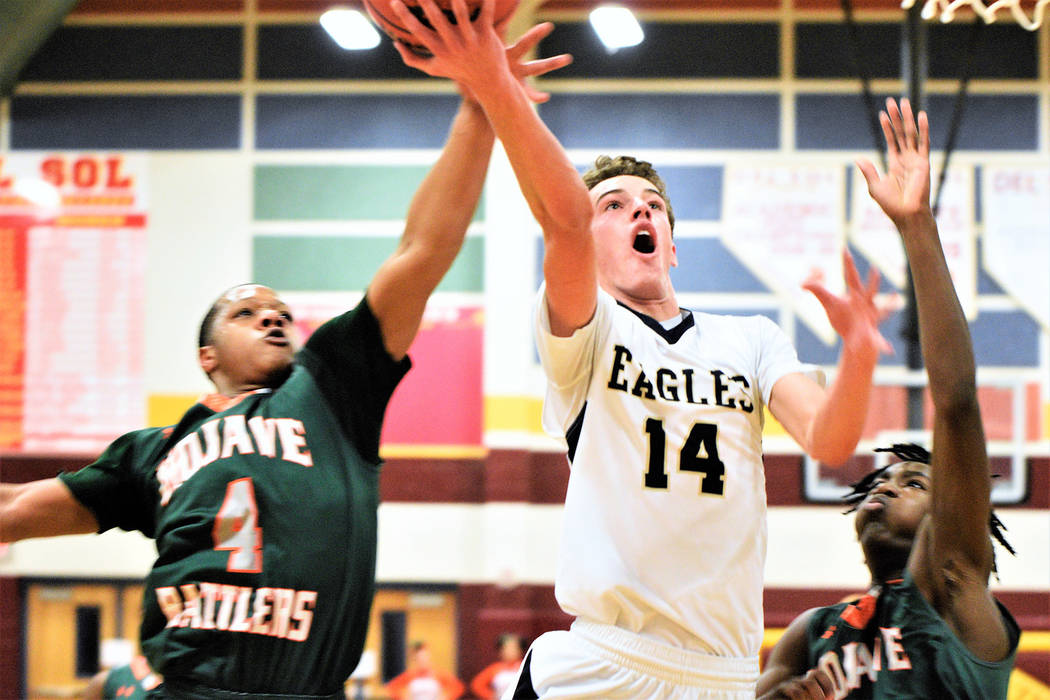 (Robert Vendettoli/Boulder City Review) Fighting through contact, senior forward Karson Bailey drives to the rim for a layup against Mojave in the 3A Southern Region semifinals at Del Sol High School on Saturday, Feb. 23.

The Boulder City High School boys basketball team lost to Mojave 67-66 in the Class 3A Southern Region semifinal Saturday, Feb. 23, at Del Sol, falling short of their goal of a state championship.

With Boulder City nine seconds away from its first 3A state tournament appearance since 2012, Mojave’s Damon McDowell knocked down a pair of free throws to end the Eagles’ season.

“Saturday was a tough night,” said head coach John Balistere. “It still stings, very tough to swallow. Credit to their kids. They made plays when they had to down the stretch, made some free throws. I really feel for our guys.”

Ahead for nearly the entire game, the Eagles led 64-56 following a basket by sophomore Ethan Speaker with 1:30 remaining. But the Rattlers rallied with a 10-2 run behind a smothering full-court defense.

Boulder City turned the ball over on three consecutive possession to fuel the Rattlers’ comeback in the final minute.

“It’s really tough to lose when you lead the game for 31 minutes and 45 seconds,” said Balistere. “I think if we had one more timeout down the stretch, we could have settled them down. The game was very physical. … The referees were letting them play, and it was getting chippy. We had some guys foul out earlier that we could have used, but I have to give credit to this group because they never stop playing. Even when things were getting away from us, they kept battling.”

An emotional scene played out afterward as Bailey, a four-year varsity letter winner, reflected on the ups and downs of his final season.

“We had a really good season this year, and I’m really proud of the way we played and competed the whole season,” he said. “I think my career ended too soon, and I’ve never had a more difficult moment in my sports career than to lose after giving everything I had this season. I hope that the effort and way I played throughout my career can have a positive influence on the returning players and the program.”

The Eagles will have a tough time replacing Bailey and Thomas, but the team still has some bright stars on its roster.

“Matt (Morton) and Ethan (Speaker) are both going to be very special players for them next year,” Bailey said. “They were huge parts of our success this year, and I was so lucky to have them as my teammates. They will definitely have to take on more responsibility next year, but I know that they will both continue to grow and have success in the rest of their basketball careers.”