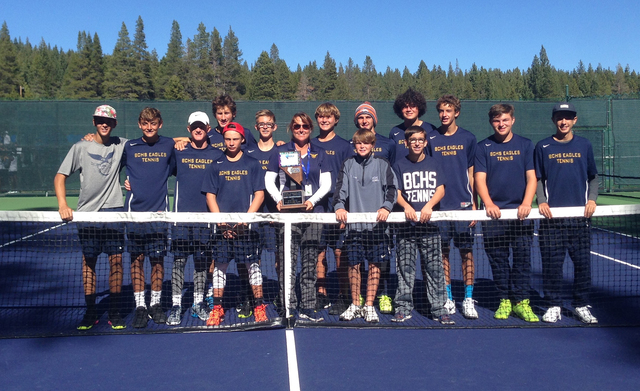 Photo courtesy Rachelle Huxford Members of the Boulder City High School boys tennis team celebrate their state runner-up title for the 3A division. They were narrowly defeated 10-8 by The Meadows during the championship game Friday at the Tahoe Donner Tennis Center in Truckee, California.

After Boulder City High School’s boys tennis program was narrowly defeated by The Meadows 10-8 in the 3A state championship Friday at the Tahoe Donner Tennis Center in Truckee, California, the foundation for the team’s future success has been set.

“I am so proud of everyone on our team for qualifying for the 3A state championship,” head coach Rachelle Huxford said. “We came in here this past week and shook things up a bit with roster changes that worked for the better. As a first-year head coach, I can’t complain about a runner-up finish. Our boys deserve this.”

Stepping up in singles competition in the finals after a 12-6 victory over South Tahoe in the state semifinals, junior Andre Pappas went 3-0 against the Mustangs, while freshman Breton Erlanger and Jorgensen finished 2-1. Claiming victories when it mattered most, both Pappas and Erlanger beat Nathaniel Van der Post, the Mustangs’ top singles competitor.

Doubles competition proved tougher for the Eagles on Friday, with the tandem of junior Tanner Montgomery and sophomore Karson Bailey earning the lone point against the Mustangs.

“Unfortunately, our doubles teams struggled in the finals. However, when all is said and done getting second at state isn’t too shabby,” Huxford said. “I can’t complain at all for my first year, but I do know the boys are hungry for that first-place trophy.”

Eager to continue to build the program into a consistent winner, Pappas echoed his hunger for success, already turning his mindset to next season.

“This season went great,” Pappas said. “It’s crazy how far our team has come in one year considering where we were last year. I’m super proud of our team and our outcome of the season. We’re already focused on next year and our goals for the next season. Many of us are planning on practicing throughout the rest of the year and focusing on what we need to improve our games.”

Having shown that a solid foundation is already set, the Eagles placed four players in the 3A state individual meet as well over the weekend, with the freshman doubles duo of Huxford and Jorgensen placing second, while Pappas placed fourth in singles.

Playing their way into state as the Southern Region’s fifth seed, Huxford and Jorgensen battled throughout, knocking off Southern Region No. 1 seed Brian Capp and Ryan Chang of The Meadows 7-6, 5-7, 6-2 and Southern No. 3 seed Ahmed Nadeem and Peyton Sachs of The Meadows 7-6, 6-7, 6-2 before bowing out against Northern No. 1 seed Louis Marin and Mickey Sullivan of South Tahoe 6-1, 6-2.

Pappas said he was happy with his fourth-place finish after falling to Van der Post in the third-place match 6-2, 6-3, while Erlanger lost in the first round to eventual 3A state champion Zach Haas of Truckee 6-0, 6-0.

“I really had a great time going to state as a freshman,” Tegan Pappas said. “I went in ready to play my hardest. I played well and had no regrets, which was my goal. State was a great opportunity and I am looking forward to next year.”