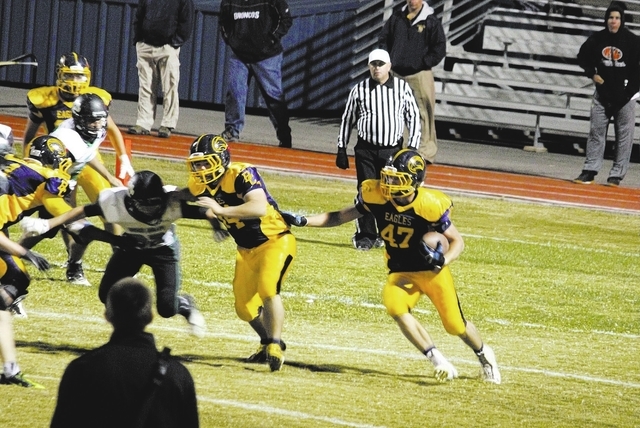 The Boulder City football team will play Moapa Valley tomorrow night. Not much more has to be said.

Moapa Valley has reached the state championship game in seven consecutive years. The Pirates have not lost to the Eagles since 2005.

Moapa Valley (6-0, 3-0) is looking as if it wants to return to the state title game again this season. The Eagles, meanwhile, are 2-4 overall and 0-2 in league play. It does not help the Eagles that the game is on the road in Overton.

“You have to respect them, of course, but we will still play hard and work for the best game we can play against them. You train hard in practice just like any other game,” senior Thomas Prach said. “They are the team to beat, and that’s our goal this week.”

The good news for Boulder City is that after the Moapa Valley game, it controls its own playoff destiny. The Eagles can clinch the fourth and final playoff spot from the Sunrise League by defeating Sunrise Mountain (1-5, 0-2) at home on Oct. 18 and Chaparral (2-4, 0-2) on the road on Oct. 18.

The Eagles know the task ahead is difficult against Moapa Valley.

The Pirates are the four-time state runner-up. They gave the Eagles their only regular-season loss last year, 45-6, in Boulder City.

“It is three hard games in a row for us, but we still can make the playoffs and we are aware of that,” quarterback Trenton Carmell said. “Moapa Valley is a great team, and a tough challenge, but we are looking down the road to our other remaining games, too, and we know we can still make the playoffs. That was our goal when the season began.”

The Eagles are coming off a 34-3 Sunrise League loss to Virgin Valley on homecoming night Friday.

The Eagles spoiled the shutout bid with a field goal on the game’s final play.

It is a tough Sunrise League opening stretch for the Eagles, who play the top three teams back-to-back-to-back. They lost 53-19 to Desert Pines (6-0, 2-0) in the league opener, then Virgin Valley and now face perennial power Moapa Valley. The three opponents are a combined 18-0.

Moapa Valley is led by quarterback Zack Hymas, who threw for 109 yards and four touchdowns Friday in the Pirates’ 38-6 win at Chaparral.

If the Eagles do beat Sunrise Mountain and Chaparral to make the playoffs, they would play the No. 1 seed from the Sunset League at home site Nov. 1.

“We have had Moapa Valley on our schedule since we were kids,” senior Brooks Roe said. “We will enter with the pregame confidence we have before each game, ready and prepared to win.

“But we also know the two games we must win come are Chaparral and Sunrise Mountain,” he added. “We can still control our own playoff fate in the coming weeks.”