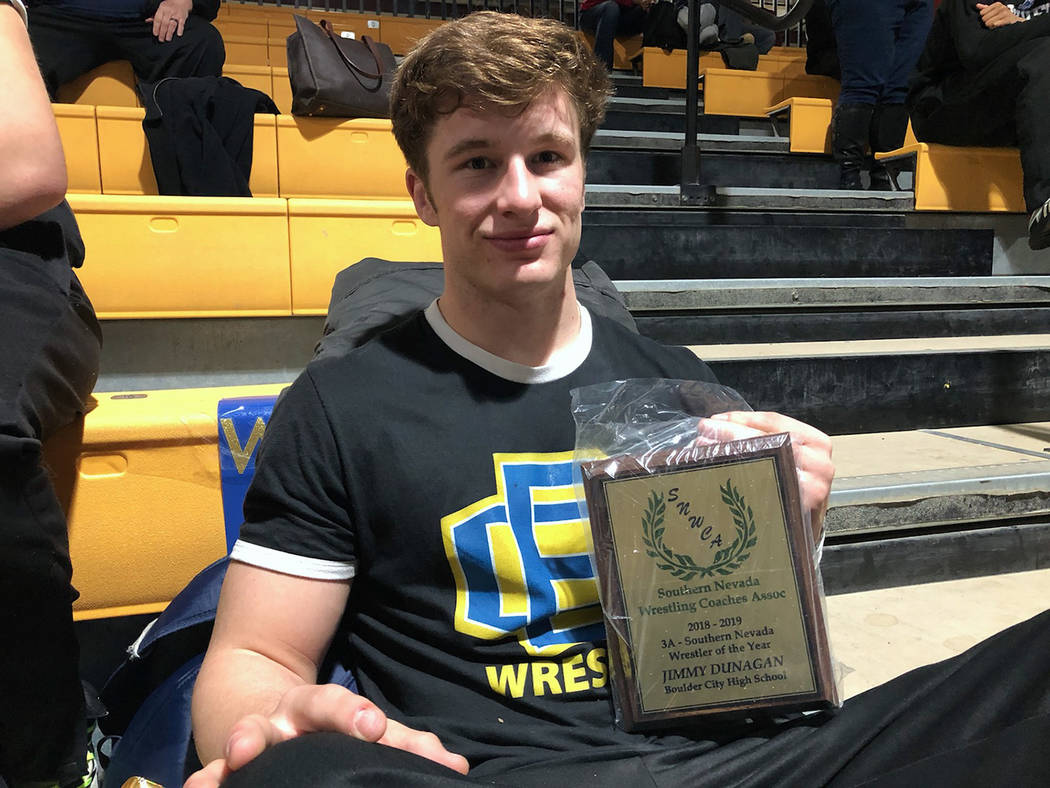 “It was a great honor to be named 3A wrestler of the year, knowing that there were so many stud wrestlers this year,” Dunagan said. “It’s good knowing that my work ethic created by my teammates, family and coaches was considered the best because I love all of them. It means everything to me. I love the sport and I couldn’t have asked for a better team or coaches.”

Helping guide the Eagles to a third-place finish at the 3A state meet in Winnemucca on Feb. 9, Dunagan became the Eagles’ first individual state champion since 2013, winning the 195-pound weight class.

“It was very emotional beating the defending state champ of that weight class,” Dunagan said. “I was very happy that I got to share my last high school match with my coaches. It was the way I wanted to go out and what I had been working for throughout my high school career.”

Helping the Eagles claim their third consecutive 3A Southern Region championship, Dunagan defeated Mojave’s Anthony Jones in the finals, after finishing third the year prior.

Dunagan made the leap from 152 pounds to 195 this year, determined to finish a champion.

“After placing fourth at state my junior year, no one would have suspected for me to come back this year and do what I did,” Dunagan said. “This just shows with hard work and dedication you can do anything.

“Winning this award only proves to the after me that you can do anything you put your mind to.”

A leader by example, Dunagan has been a key part of the Eagles’ program. Even with his departure from the program looming, coach Jim Cox feels Dunagan’s impact will be felt next season.

“We’re very happy for Jimmy to win this award,” he said. “He’s a kid who does everything right and you always want that success for them. He comes to practice early, works out in the morning, eats right, thinks right, he’s a leader in our program. Our guys see his example and want to follow it. They see how hard he works, the day to day. His example is more powerful than anything he could say.”

Dunagan picked up victories this season against opponents from Nevada, Arizona, California, Minnesota, South Dakota and Utah and finished his senior campaign with a 40-2 record, according to Cox.