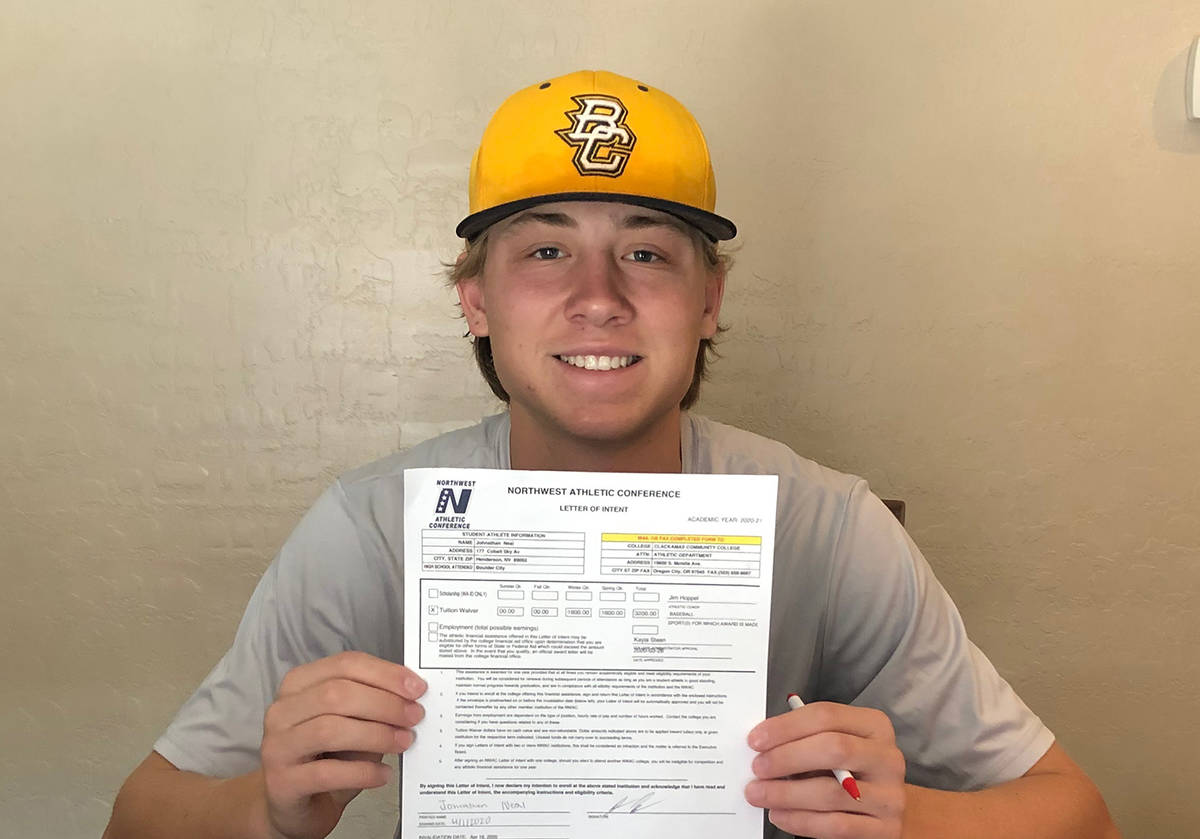 (Jonathan Neal) Jonathan Neal, a senior at Boulder City High School, recently signed a letter of intent to play baseball at Clackamas Community College in Oregon City, Oregon. He has been the Eagles’ rising star on the pitcher’s mound.

Coming into the year with just 11 innings of pitching experience on the mound, this season was supposed to be Neal’s breakout campaign, but it was cut short due to the COVID-19 pandemic. After finding the right fit for his athletic career after high school, head coach Ed McCann said he couldn’t be more delighted for his senior.

“I’m really happy for Jonathan,” he said. “Coming into the season, I really thought this was going to be a good year for him, that he had to opportunity to turn a lot of heads. Having our season shortened by this COVID-19 situation really had the chance to hurt him, but schools kept calling and I’m glad he’s found the right fit.”

Looking forward to the chance of competing for a Division I scholarship, Neal said he is focused and locked in about his future with Clackamas and is grateful for the opportunity. Neal said he knows he’s worked hard to get to this point and won’t stop until he accomplishes his goals.

“I’m ready to go up there and compete,” Neal said. “I really want to try and move up to a higher level of college athletics. I’m going to be really focused over these next two years. I’m excited to go play in a different environment and see better competition.”

Looking the part of a collegiate athlete, Neal has risen through the Eagles’ program, considered one of the top teams in the 3A classification the past decade. Looking to become a workhorse this season, Neal pitched 11 innings on the mound over three appearances, striking out 11 batters, with a 1-1 record.

“Clackamas is getting a really good baseball player,” McCann said. “The great thing about Jonathan is he projects really well at the next level. I’ve been doing this for 35 years and I believe if he continues to progress, he can turn into a dominant pitcher. He’s a converted catcher who’s really just starting to crack the surface on his potential. This year was going to be a good one for him. He proved that early against Valley with a dominant outing. I believe good things are in his future.”

Coming into his own as a complete pitcher, Neal possesses a fast ball, two-seam fast ball, change up and curve ball in his arsenal. Effective on the mound, Neal’s best outing with the Eagles came March 11, their last official game of the season. He threw a complete six innings where he allowed one unearned run off of two hits, while striking out six batters.

“I came into this season really focused this year, ready to be a leader,” Neal said. “Last year, my head just wasn’t in it. This year, I feel like I came in really ready to throw and make a difference. I’ve gained a lot of velocity and have matured a lot on the mound. I’ve been working on my off-speed pitches a lot. They’re definitely a lot more effective now than they’ve been in years past. I’ve been putting in a lot of time in the gym to get better.”

Already showing improvements on the mound heading into his senior season of high school, McCann seems to think the skies are the limit for his star pitcher.

Having previously coached at the collegiate level for several years, McCann likened Neal to current New York Mets pitcher Seth Lugo, who McCann signed when he was the head coach at Centenary College of Louisiana in 2008.

“When schools came calling about Jonathan, I told them I see a lot of Seth in him,” McCann said. “Now that’s not to say he’s going to start throwing 94 mph by the time he’s a senior in college and play in the majors; but like Seth he was throwing in the low to mid-’80s during his senior year of high school and you can just see that all the tools are there. Jonathan has a nice build at six-foot-two; he really looks the part. It wouldn’t surprise me at all if he went up there and did really well the next two years and earned himself a Division I scholarship. Had he been able to play a full season this year, I think he could have been on the cusp to get one now.”

Receiving high praise from his head coach, only time will tell if Neal will earn a Division I scholarship. For now at least, Neal said he is happy where he’s heading and ready to get to work.

“I really enjoyed my visit,” Neal said. “Clackamas reminded me a little of Boulder City since it’s a small town. I have some family up in Oregon. I really feel like this is going to be a good fit for me.”