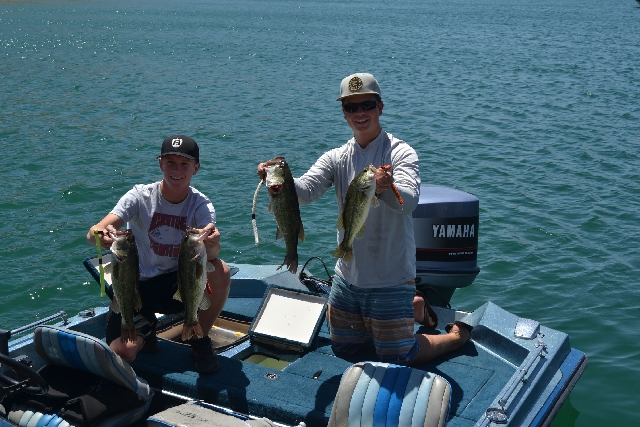 The pair were the youngest of 25 boats that competed in the event. The third-place finish netted the team $250 each.

Four Boulder City athletes were named Spring Athletes of the Year for their sport by the Las Vegas Review-Journal on June 13.

Senior Tanner Howell received the honor for Division 1-A and other small divisions baseball. Howell, a Dixie State (Utah) recruit, led Southern Nevada with 59 RBIs and previously was chosen the only 1-A player to the Review-Journal’s first-team all-state. The Eagles’ No. 1 starter also played shortstop as they reached the Division I-A state final.

In boys’ swimming, Jared Smith recorded the top times in the state for all divisions in the 200 and 500 freestyle events at the Division I-A state meet. He was named the overall swimmer of the year for all divisions.

In girls swimming, sophomore Alex Hubel won the honor for Division 1-A and other small divisions. She dominated the Division I-A freestyle sprints, winning state in the 50 and 100 events.

On June 6, Logan was named the Division I-A Sunrise League Player of the Year by the league’s coaches.

On June 7, Logan played in the 10th annual Sager’s Cup but lost to the Sunset Region’s Alex Jordan, 4 and 2.

“It most definitely feels good to be honored,” Logan said. “I was glad to be the player all year that was expected to show up and expected to perform and add competition to the league. It was a challenge.”

Boulder City’s Bruce Reid was chosen the Sunrise League’s Coach of the Year after guiding his team to a 27-9 record. Reid has coached softball for 20 seasons, the past 11 at Boulder City.

The Boulder BMX will be celebrating USA BMX’s Olympic Day at 6 p.m. Sunday.

USA BMX partners with the United States Olympic Committee and USA Cycling, to offer a free day at participating tracks around the country, including Boulder City. The event is free and open to the public.

The goal of the day is “to promote Olympic values and participation in the sport … regardless of age, gender or athletic ability. The track is at 1799 Commons Way. BMX was introduced into the Olympics in 2008.