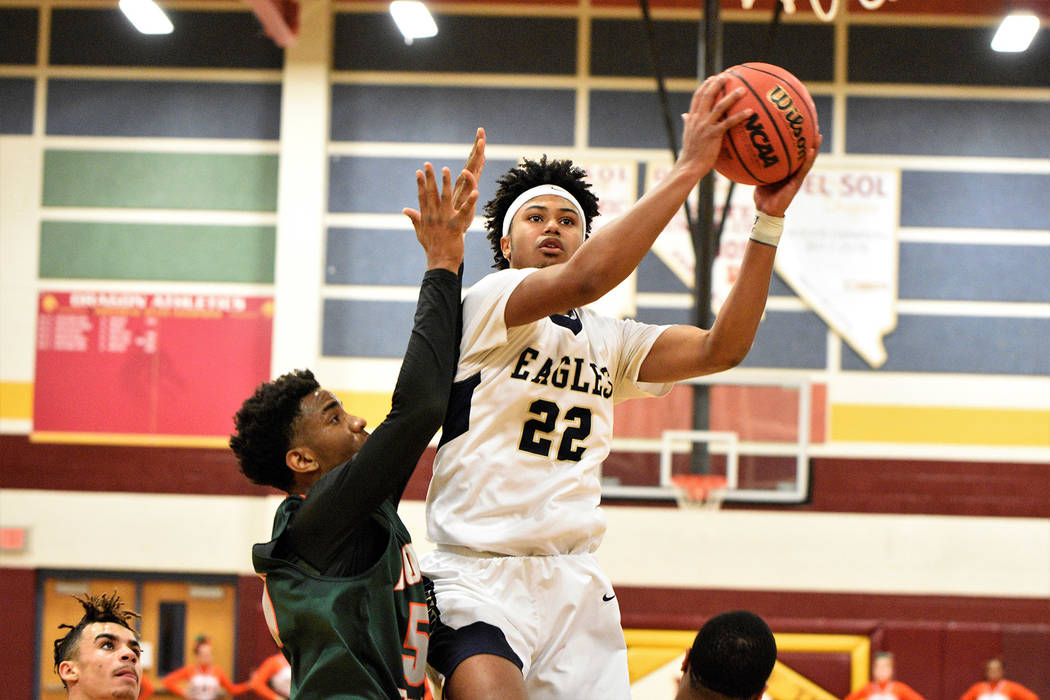 (Robert Vendettoli/Boulder City Review) Boulder City High School senior Derrick Thomas, seen slashing his way to the basket against Mojave on Feb. 23, has been recognized as an all-state honorable mention for his performance on the Eagles' basketball team and helping lead the way to their first league championship since 2012.

“It’s a tremendous honor to make the all-state team, especially considering how far I came last year after only making honorable mention for the region,” Thomas said. “I could not have achieved this honor without the instructions from my coaches and the support and camaraderie of my teammates.”

Having a breakout season with the Eagles, Thomas a 6-foot-5 forward was named 3A Sunrise League player of the year after leading the boys to their first league championship since 2012.

A combo wing with great scoring touch, Thomas was the second leading scorer in the 3A classification, averaging 18.2 points per game.

Thomas, who is weighing his collegiate options, also contributed with 6.4 rebounds and 2.5 assists, while swiping two steals per game on the defensive end.

“I’m still keeping my options open,” he said. “I have a few workouts and unofficial visits coming up soon. Hopefully, I’ll be able to confirm a school in the near future.”

Howard is hopeful her breakout junior campaign and all-state nod can open a few doors though she has another year before she needs to make her collegiate decision.

“I’m honored to be mentioned alongside the great talent of 4A schools,” she said. “Often 3A players get overlooked by larger colleges because we’re smaller. Hopefully, college recruiters and all-state bids will recognize the talent that smaller schools have.”

Named 3A Sunrise League player of the year for helping the girls team reach the state tournament for the first time since 2014, Howard said she was honored by the nomination.

“This accolade is not just a compliment to me, but really my team and our coaches,” Howard said. “It validates the amount of effort, heart and hard work we all put into this year’s season.”

Dominant inside the paint and on the boards for the Lady Eagles, Howard averaged 17.5 points and 12.5 rebounds per game, while adding 1.5 blocked shots on the defensive end.

Playing all over the field for the Lady Eagles, Reese scored a touchdown rushing, receiving and on defense, establishing herself as a true playmaker.

“My coach always said the most important play is the next one,” she said. “I always took that saying to heart because if I didn’t do what I wanted the first time, I knew I had another try. Every play I’m focused and the team is focused on scoring. Knowing that I was the top scorer meant it was harder for me to get into the end zone. I took up the challenge each time and did what I needed to do.”

One of the top players in the 3A classification, Reese rushed for 1,299 yards and 10 touchdowns, while catching 70 passes for 567 yards and seven touchdowns.