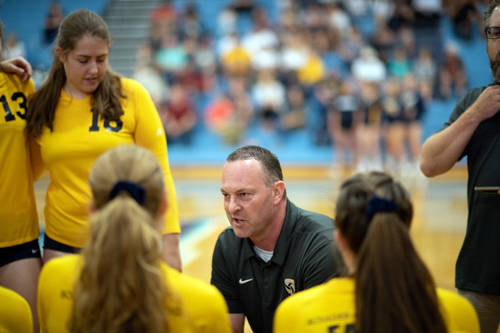 (Robert Vendettoli/Boulder City Review) Kurt Bailey, who led Boulder City High School's volleyball team to its second consecutive state championship in his first year as head coach, was named the 3A coach of the year.

Kurt Bailey wrapped up his first season as head coach of Boulder City High School’s girls volleyball team by being named 3A coach of the year.

“It’s honor to be named coach of the year,” he said. “It’s pretty surprising, but I have other great coaches in our program that help me and have helped our girls. A lot of credit goes to my assistant coach Chad Robinson. This award isn’t only for me, it’s for our whole team.”

Capping off a back-to-back 3A state championship season, Bailey inherited the program from coaching legend Cherise Hinman, who stepped down last spring after 20 seasons at the helm.

“It was very exciting to repeat as state champions,” Bailey said. “Being an assistant on the team the last few years, I knew the talent that we had coming back, but it was challenging to try and continue the great legacy that she crafted. There was a lot of pressure not just on me, but on the girls to repeat. It’s not easy to get back to the state tournament.”

“Being named coach of the year is obviously attributed to the success of your team and I credit those girls,” Bailey said. “They all worked very hard this season to get back there and be state champions again. People tend to forget that just because we had a bunch of starters returning that we had to replace our best player from last season. Everyone did a great job stepping up.”

Of those players who stepped up, four Lady Eagles were named 3A all-state selections, highlighted by 3A player of the year, Kamry Bailey.

Breaking out in her sophomore season, Kamry Bailey also made the Nevada all-state team, which highlights the best players regardless of classification. She generated 350 kills, 198 digs, 101 serving aces and 27 blocked shots.

Also making the 3A all-state first-team were sophomores Ava Wright and Sierra Orton, who, alongside Kamry Bailey formed a dynamic underclassman trio.

Wright dished out a school-record 1,084 assists, the second most all-time for a single season in the 3A classification behind Faith Lutheran setter Megan Kronschnabel, who set the record in 2015 with 1,135 assists. An all-around threat for the Lady Eagles, Wright was also named to the Nevada all-state second-team after generating 203 digs defensively, 139 aces and 27 blocks.

A two-way contributor for the Lady Eagles, Orton tallied 214 kills offensively and 66 blocks on the defensive end, while second team 3A all-state selection Raegan Here generated 179 kills and 43 blocks.

With all four players returning, coach Bailey said he is hopeful to keep the team’s winning tradition and state championship run intact.

“We have a lot of great players, who continue to work hard and get better,” he said. “I’m excited to get this group back next year and hopefully have another great season. Obviously, I want to continue the legacy that we’ve built, but that’s easier said than done. It takes a lot of hard work to get to that point. I believe the girls are up for the challenge. We’ll see how everything plays out.”