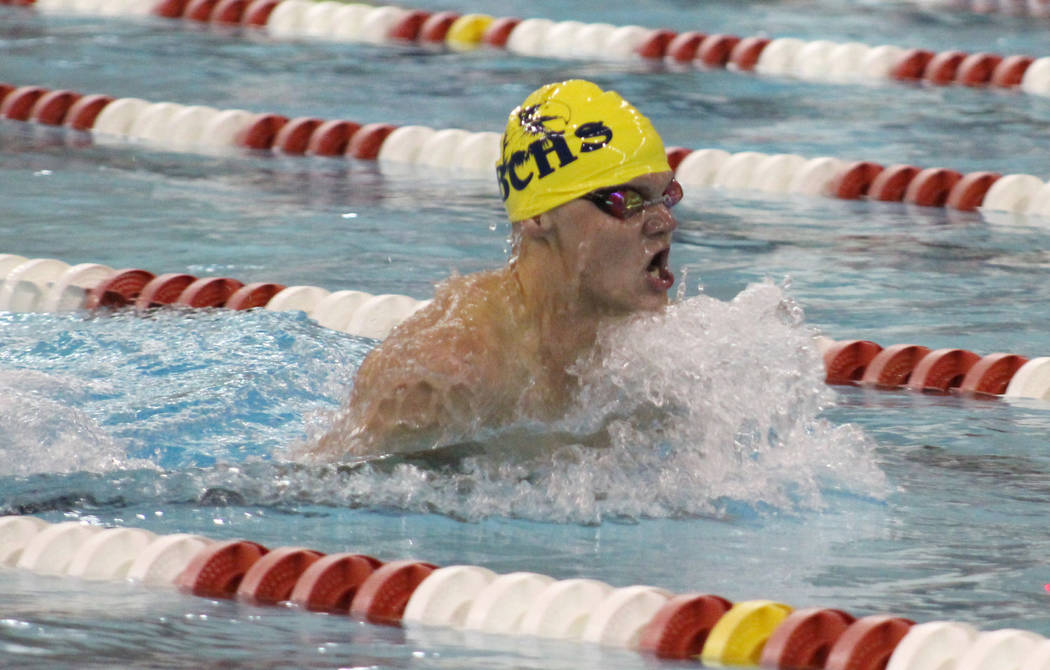 Tim Guesman/Las Vegas Review-Journal Boulder City High's junior A.J. Pouch competes in the 200 breaststroke at the Class 3A state swimming championships at UNLV on Saturday. He was the Eagles' long swimmer to win any events, placing first in the 100-yard breaststroke and 200-yard individual medley.

Falling just short of capturing its first 3A state championship since 2010, Boulder City High School softball team ended its season with a 13-2 loss to Northern challenger Lowry in the losers bracket finals.

“We kind of ran out of gas at the end,” head coach Angelica Moorhead said. “Our bats didn’t produce what they normally do for us, and if we’re not hitting, we are not scoring runs.”

Defeating Lowry 5-0 in their opening-round matchup where they produced eight hits, the Lady Eagles were only able to produce five hits the second time around, failing to put together consecutive quality at bats.

Leading the charge in their lone victory in the 3A state tournament, senior Lily Osman finished 1-for-3 with a two-run home run, while junior Marleena Mills (1-for-3) and sophomore Ellie Ramsey (2-for-3) each finished with a run batted in.

In their season-ending loss to the Buckaroos, Bennett-Jordan finished 2-for-3 at the plate, picking up the loss where she allowed 14 hits with two strikeouts.

Finding themselves in a pitching duel on day two of the state tournament that sent them to the losers bracket final, Boulder City dropped a heartbreaker to eventual state champion Churchill County 2-0.

Doing her job on the mound, Bennett-Jordan allowed no earned runs on three hits with six strikeouts.

Both of the Greenwaves’ runs came on errors.

Mustering up only three hits, Osman, senior Jerra Hinson and sophomore Ashley Wishard all finished 1-for-3.

Our season as a whole was great,” Moorhead said. “We made our goal of making it to the state tournament, and finished with a 25-11 record. Yeah we didn’t finish like we wanted to, but I am more than proud of these young ladies and I want to thank them for a great season.”

Their toughest competitor throughout the past decade, the Eagles were finally caught by the Wolverines 145-124.

“Truckee’s team had all club swimmers and this year we only have two club boys,” head coach Sara Carroll said. “I’m proud of all the boys. I expected this to happen, but we still represented well. This was a special team for us this year, and I enjoyed them very much.”

Boulder City High School girls track and field star freshman Kamry Bailey was at her best Saturday, May 19, at the 3A state meet in Reno.

Senior Taylor Tenney placed sixth in the triple jump (32-1.25), while senior Maggie Roe placed seventh in the discus throw with a heave of 103-8.