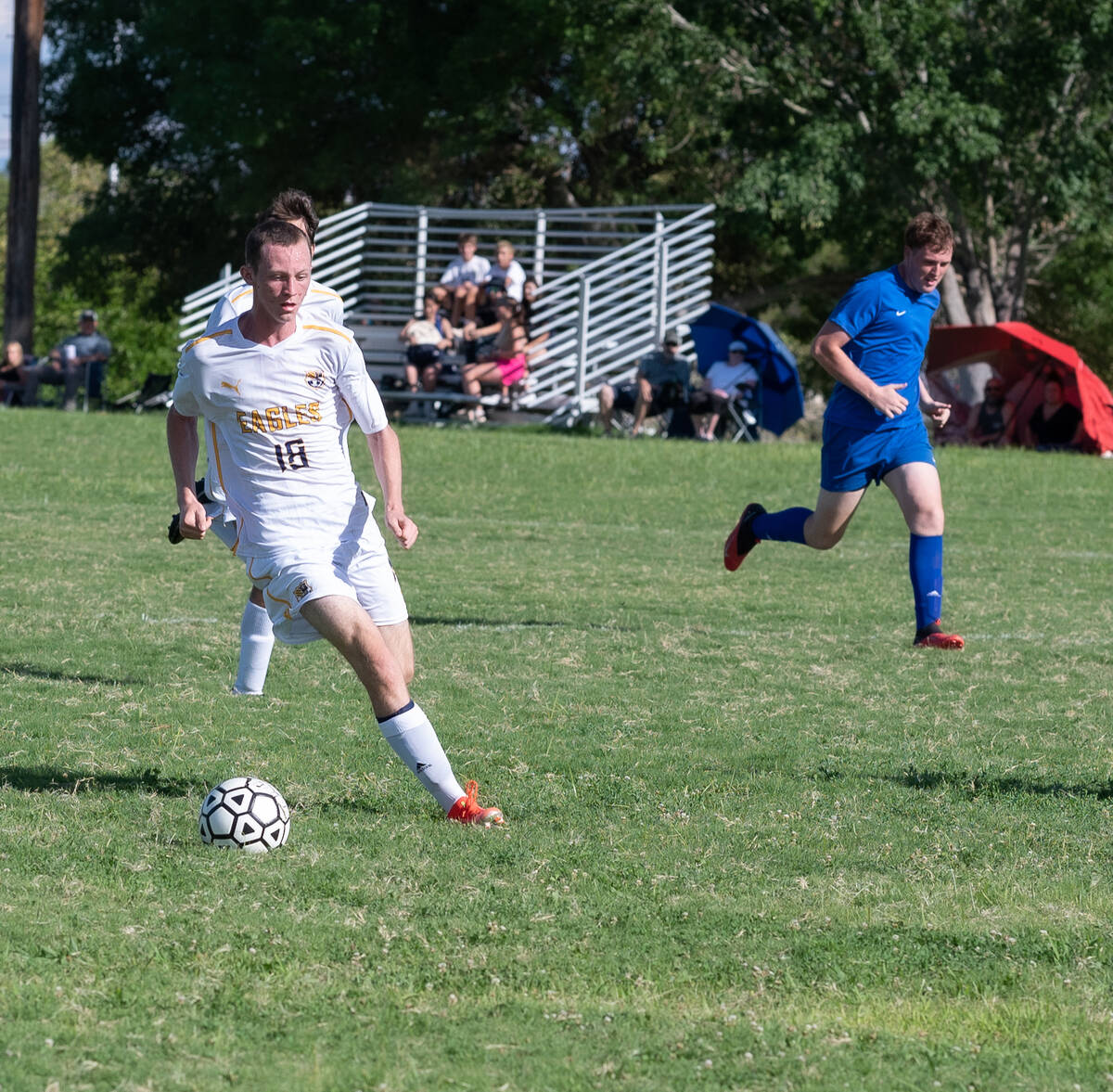 (Jamie Jane/Boulder City Review) Robert Crowl of Boulder City High School’s boys varsity soccer team tries to get the ball into the net during the Eagles’ 6-2 loss to Equipo Academy on Aug. 25, 2022.

Playing in the Las Vegas Kickoff, the Lady Eagles found victory against 4A Western, while tying with 3A rival Moapa Valley. They suffered a defeat against 5A Las Vegas.

Pulling away with a 5-1 victory over Western on Friday, Aug. 26, senior Miranda Williams scored a pair of goals, while senior Ashley Mendez and sophomores Allie Beal and Abby Byington each contributed with a goal.

“The objective of this tournament is to have them play tougher top-level teams and learn how to come together as one team,” said head coach Arnold Oeland. “They came together and played as one against Western and it was magnificent.”

Tying with Moapa Valley 3-3 on Aug. 24, junior Natasha Oeland scored twice and Byington scored once. Hammond dished out an assist against the Pirates, along with Byington.

Junior goalie Saige Schweich was recognized by coach Oeland for her excellent effort.

“The Moapa game was a real barn-burner,” Arnold Oeland said. “Saige came out and had a great game, stopping many shots on goal and showed promise. Moapa brought down a truckload of players and just kept subbing in and out, while our girls held strong and worked through the 80 minutes with 1-2 subs.”

Falling to Las Vegas 5-2 on Aug. 25, senior Ava Payne and Nelson each scored a goal for the Eagles. Natasha Oeland dished out an assist.

Nelson also scored a goal against rival Virgin Valley on Tuesday, Aug. 30, on the road in a 5-1 loss.

Looking to build momentum, the Lady Eagles will host Cheyenne today, followed by a road game at Chaparral on Wednesday, Sept. 7.

Falling to Equipo Academy 6-2 in their season opener on Aug. 25, the Eagles rebounded with a 3-1 victory over rival Virgin Valley on Monday, Aug. 29.

Controlling the pace against the Bulldogs, junior Antonio Costa scored a goal, while dishing out a pair of assists.

Junior Roman Rose scored a goal against the Bulldogs, and sophomore Sean Pendleton added both a goal and assist.

Against Equipo Academy, Rose and sophomore Luke Wright each scored goals. Pendleton added an assist on the day.

Starting today, the Eagles will play in the Ric Grenell Cowboy Invitational at Chaparral High School over the weekend.