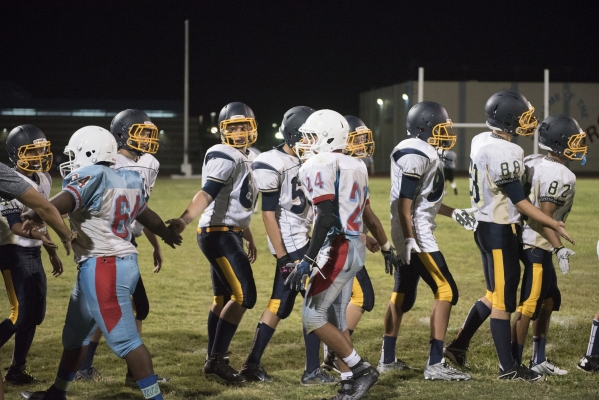 The Boulder City junior varsity and varsity football team held a scrimmage against Western on Friday in preparation for the season opener that’s fast approaching.

The Eagles and Warriors’ joint practice lasted about an hour and a half and featured offense, defense and special teams practice work, with both teams working out all the rust and kinks that come with the offseason.

“They were nervous coming out of the gate,” coach Chris Morelli said. “The aggressiveness wasn’t there early, but after a couple sessions, I think it started to kick in and the butterflies went away.”

The Eagles started off a bit sloppy, but as Morelli alluded to, picked up steam as the scrimmage went on. One thing that was on display, however, was the speed advantage BCHS had over its counterpart.

Lacking the true size other high school teams have across Southern Nevada, the Eagles run a variety of misdirection plays that can emphasize their speed to supplement the lack of size and strength.

“We don’t have a 190-pound kid we can just hand the ball to and let him run,” said Morelli. “We’re going to have to rely on putting the defenses we face in a position that we can benefit from.”

The Air Force-inspired triple option offense that Morelli has installed this offseason allows the team to do just that: make the defense guess which one of the Eagles’ three offensive options will have the ball after the snap.

Morelli said once the teams make adjustments to Boulder City’s offense, the defense is spread out enough for the Eagles to “come back and run a counter.”

Morelli also alluded that every position outside of the quarterback spot is up for competition, and it has made the players that much more focused during practice.

At the quarterback position, Austin Wishard was the one really bright spot during the BCHS scrimmage. Wishard looked — as well as played — the part of a senior leader.

“He looked good, and he’s gained a lot of confidence as he’s gotten older,” Morelli said. “He really wanted the job, and he earned it.”

On the contrary, the defense is where the majority of the Eagles’ youth lies. Although the defense began to step up toward the end of the session, the lack of game speed was evident to Boulder City’s coaching staff from the start.

“That’s one thing we were lacking today … we weren’t aggressive enough filling holes when holes opened up,” Morelli said. “We do have speed and we can run with other teams, but it’s that first-step aggressiveness we lack. It’s going to take game-time experience, and I hope we can get that in our first three games before we start our league games.”

The team now has this last week of practice and repetition to get into game shape and be ready for the season opener Friday at Clark.

The last week of practice will be intense and efficient, according to Morelli, and the team is in the right frame of mind and knows exactly what to expect.

“They have to believe in the system that we put in, and if they do, they can accomplish just about anything,” Morelli said. “They should be ready for Friday, and I think they will be.”