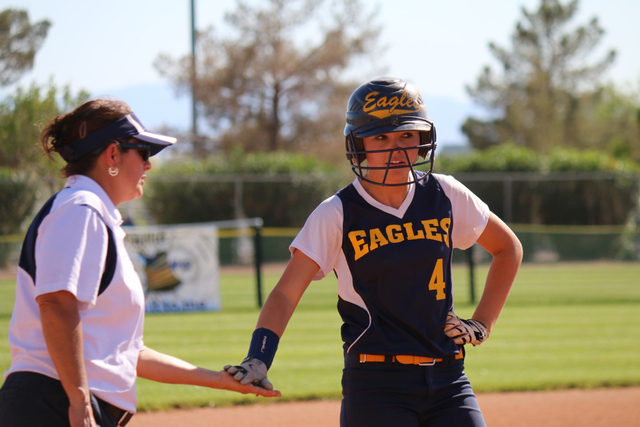 The Lady Eagles continued their winning ways as they inch closer to the end of the season.

The softball team traveled to Sunrise Mountain on April 15, where they won 13-0 in a five-inning game. It was another complete game by Charlie Masterson, who had 15 strikeouts. She also had four RBIs. Kylee Hamel and Jessica Embro brought in three and two RBIs, respectively.

Following Sunrise Mountain, Boulder City headed back home for a Friday game against Del Sol. It was another five-inning game for the Lady Eagles, who won 15-0. Jessica Moorhead pitched a complete game with six strikeouts. Alyssa Ybarra, Jerra Hinson, Masterson and Hamel all brought in two RBIs.

The week ended with a tough 9-0 loss at Pahrump Valley on Saturday. Despite having five hits, Boulder City just couldn’t bring its runners home. Both Micayla Gegen and Moorhead pitched, and earned a combined four strikeouts.

The Lady Eagles started this week off with a 18-3 win at Virgin Valley.

They played Southeast Career and Technical Academy Wednesday, but the game was too late for results to be included in this edition.

Up next for the Lady Eagles are games against Bonanza, Chaparral and Moapa Valley to finish out the season. The first of those games is Friday at home.

Overall, the girls are 10-0 in league play and are in first place.

The Lady Eagles are selling tickets for their second annual Night of Drawings and Pancake Breakfast, which will take place on Friday and Saturday, respectively. They will be giving away a 40-inch, flat-screen smart TV.

Boulder City’s Track and Field teams competed in two meets last week. The first was the Boulder City Weekday on April 15, and the second involved a trip to California for the Ocean View Small School Invite.

Junior Troy Wilburn placed first in pole vault, with a vault of 10-0, while Roe placed second in triple jump, recording a jump of 37-03.

During the Ocean View Small School Invite in California, the Eagles placed second overall with 65 points, vying against 23 schools. The girls finished 10th, with 21.5 points.

Roe was in the top three again for both hurdles races. In the 110-meter hurdles, he placed third, running 17.94, while placing second in the 300-meter hurdles with a time of 41.60.

For the freshman and sophomore finals, freshman Zachary Trone placed second in high jump, with a jump of 5-04 and first in triple jump, jumping 39-07.

On the girls team, Gneiting placed first in shot put, throwing 35-11, and fifth in discus recording a 99-06. Maida Nelson placed second in pole vault, with 7-0.

Boulder City traveled to Pahrump Valley High School on Wednesday; results of the meet were too late for this week’s paper.

In the match against Moapa Valley, the Eagles scored 426 to Moapa’s 471.

Despite heavy winds of up to 40 miles per hour, Hunter Ulibarri shot 76, winning him the medalist honors. Kyler Atkinson tied for second with 82, just barely edging out teammate Luke Logan with 83.

Logan was medalist for the match, with the best score on the nine-hole course, shooting a 35. Quentin Turner shot a 40.

Next up, the team plays Foothill at 3 p.m. Monday.