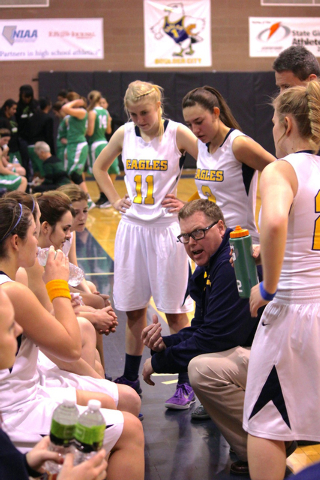 The Boulder City girls basketball team begins the season Dec. 2 with something they haven’t had in five years — a returning coach.

Paul Dosch returns for his second season as the coach of the Lady Eagles. A year ago he was the fourth coach in four years.

“This is the first time in my four years that we have the same coach, but we have learned different things from all of the coaches and improved as a team,” senior guard Alyssa Ybarra said. “We are looking to return to state and take it one step further. It is frustrating to make the championship game and not win it. I know everyone is committed to working hard and getting back to state.”

Despite all the changes in coaches, the program has thrived and made trips to the state’s final four the past two years.

Dosch’s first season ended with a 24-5 record overall and 11-1 in the Sunrise League. The Lady Eagles were the No. 1 seed in the playoffs, won the Southern Region championship and advanced to the state championship game.

The previous year the Lady Eagles advanced to the state tournament and were eliminated in the semifinals. They have made the playoffs for six consecutive years and 15 of 16 years, missing only in 2008.

“It was tough to get to state and lose in the final,” said Katlyn Daly, who returns as starting point guard for a fourth season. “It’s nice to have the same coach and be able to work on things from last season and improve this season to be able to achieve our goals.

“I’m so ready for the upcoming season. I’m honored and excited to be a part of such a successful program once again. We have great coaches that will lead us to our goals. I am also very excited about being a senior captain because I get the chance to work with the younger girls in our program so they can reach their full potential, and carry on our BCHS girls basketball legacy.”

The biggest loss for the team was graduating all-state player Whitney Barlow.

“Whitney was a one-of-a-kind player and you don’t replace her; you just continue with what you got,” Dosch said. “Everyone here is dedicated to the team concept and that is a large part of our success. We are all about playing as a team, not as individuals.”

The Lady Eagles return seven lettermen, including the four-year starting back court of Ybarra and Daly. Forward Megan Morton is returning from an all-state season as a sophomore. Those three will carry the load of producing points and leading the defense.

Others who will need to contribute for the team to be successful are Rylee Dosch, Samantha Hansen, Julia Worrell and Sariah Gneiting.

“They all worked hard this summer and fall and are ready to go,” Dosch said. “The goals as a coach are not changing. We want to win the Sunrise League, then the Southern Region and then the state championship. We have a very tough schedule this year, which will be great for us. These girls will be challenged, and I expect they will respond.”